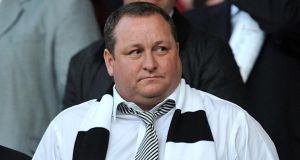 Mike Ashley: he controls the listed UK retailer Sports Direct, which owns a 50 per cent stake in Heatons, the Irish department store chain

Mike Ashley, the billionaire owner of Newcastle United football club, flew into Dublin over the weekend as part of a last- ditch bid to prevent the proposed sale of Elverys Sports to its management and other investors.

Mr Ashley controls the listed UK retailer Sports Direct, which owns a 50 per cent stake in Heatons, the Irish department store chain. Heatons wants to buy Elverys, which is close to finalising a deal, backed by the National Asset Management Agency (Nama), to be bought out by a consortium assembled by the advisory firm Capnua.

A spokesman for Heatons/ Sports Direct said the company would pay a price 25 per cent above the offer currently on the table for Elverys, which employs 650 staff in 55 stores around the country.

Sports Direct/Heatons also feels it has been “locked out” of the process to buy the Irish sports chain, which is currently owned by the Mayo-based Staunton family and is being sold through a receiver, David Carson of Deloitte.

‘Pre-pack’ receivership
John and James Staunton have significant property debts with Nama, which will get the proceeds of the sale. The agency is sanctioning the sale of the Elverys business to management and the Capnua investors as part of a “pre-pack” receivership process, where the buyer is lined up in advance.

It was reported yesterday that Nama would receive about €10 million for the Stauntons’ Elverys stake, which does not include its properties.

The Sports Direct spokesman said the bid proposed by Mr Ashley was higher than the one on the table, and that it wanted the message to go to Nama “loud and clear”.

It was reported yesterday that other potential bidders, including Lifestyle Sports, were unhappy at the Elverys receivership processand had contacted the receiver to say the company had not been properly marketed to them.

Mr Carson could not be reached for comment. A spokeswoman for Deloitte did not return a call before this newspaper went to press.

‘Always on the lookout’
The Nama-backed restructuring of Elverys has been mooted since last October. The Irish Times also established at the time that Heatons was assessing a move for the business. Heatons said last year it was “always on the lookout” for expansion opportunities, although a source close to it said “nothing had reached a corporate finance level” at the time.

Elverys has annual revenue estimated at about €65 million, although it does not file accounts as it has unlimited status. It is believed to be losing money, but reports over the weekend suggested it would be profitable if all its stores were paying market-level rents.

1 Columbia Sportswear defies gloom with first Irish standalone shop
2 Restaurants file court actions against insurers over lockdown losses
3 Nine more suing INM and Leslie Buckley over alleged data hacking
4 ‘The rental situation stops me moving back home’
5 Could your old car be giving away all your secrets to its new owner?
6 Home or car: what’s the best use of my savings?
7 Why are markets booming when a crash is on the way?
8 Income tax receipts prove remarkably resilient to coronavirus
9 Why UK supermarkets are not making super profits
10 How to further divide the economy using the wage subsidy
Real news has value SUBSCRIBE