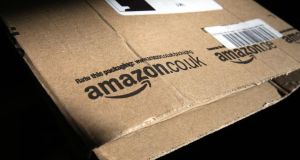 Amazon has reported a loss for the second quarter of the year as operating expenses rose 23 per cent to $15.6 billion. Photograph: Paul Faith/PA Wire

Online retailer Amazon has announced a surprise reversal in profits after another period of booming sales failed to offset a surge in costs.

It comes days after the company announced it was scrapping its free “super saver” deliveries to the UK on some products worth less than £10.

Overall sales at the US-based company were up 22 per cent to $15.7 billion, fuelled by a 30 per cent growth in revenues in North America to $9.5 billion.

Sales rose by a smaller proportion in the rest of the world, up 13 per cent to 6.3 billion.

But the company recorded a loss as operating expenses rose 23 per cent to $15.6 billion.

Investors have largely tolerated thin profit margins at Amazon as the company focused on its increasing revenues and long-term prospects.

But US-based shares in the company fell 3 per cent in extended trading after the results were released last night.

The company said net sales were expected to increase by between 12 per cent and 24 per cent for the third quarter.

Best-sellers in the UK for the quarter were dominated by Kindle books including Inferno by Dan Brown and titles by self-published authors, Amazon said.

Amazon, which has been criticised over its tax arrangements, set aside $13 million for income tax in the quarter, compared to $109 million for the same period last year.