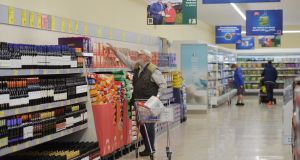 Aldi last month pushed through the £10 billion sales barrier in its UK and Ireland stores for the first time as festive shoppers snapped up luxury products and cut-price vegetables.

More than 6.8 million bottles of wine, champagne and Prosecco were sold at Aldi stores during December – more than 200,000 bottles per day – along with more than four million mince pies and more than 100 million packs of vegetables.

“This was our busiest-ever Christmas as millions of festive shoppers switched to Aldi from more expensive food retailers,” said Aldi UK and Ireland chief executive Matthew Barnes. “Although we saw strong growth across all categories, the performance of our premium Specially Selected range in particular surpassed all expectations.”

Aldi and German rival Lidl have been waging war on the Irish and British grocery markets in recent years. Although SuperValu, Dunnes Stores and Tesco remain the top supermarkets in Ireland in terms of market share, recent figures show the German chains have a market share of just under 12 per cent each.

1 Basic income for all: Has the Covid crisis given us a new economic model?
2 ‘I don’t need to do any of this. . .I don’t actually need to work.’
3 Promontoria barred from pursuing doctor over Ulster Bank loan
4 Fiona Reddan: Who’s afraid of Revolut? Not AIB and BOI it seems
5 Only way is up for Stripe as valuation skyrockets
6 Brexit stumbling blocks persist as Barnier travels to London
7 Unilever’s Dutch and British arms merge after 90 years ahead of Brexit
8 Anti-alcohol zeal of public health experts peppers reopening debate
9 Online shoppers face unwelcome tax surprise
10 ‘Make plans but don’t hold on to them too seriously’
Real news has value SUBSCRIBE