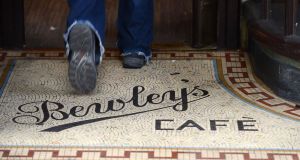 A row over rents between coffee group Bewley's and its landlord Ickendel, part of the Treasury Holdings group, has been settled in the High Court.

Mr. Justice Charleton ruled this morning that the rent payable by Bewley's Grafton Street to Ickendel must be allowed to fall to market reflective rates under the provisions of the lease.

The case was regarded as a test case in the contentious area of upward-only rent review lease agreements.

Ickendel had taken a High Court action against Bewley's on the grounds that it could not reduce rents on the premises because it only permitted "upwards only" rent reviews.

Bewley’s argued that the lease, which was first entered into on September 22nd, 1987 with a term of 35 years, allows rents to fall in line with market values, as well as rise. It said that the case was of “vital importance” to the financial survival of Bewley’s Grafton Street. Under the lease, rent was to be reviewed every five years, with the last review, in 2007, fixing a rent of € 1.5 million on the premises.

Bewley's has welcomed the decision of the High Court and the market rent will now be established by an arbitrator who is already appointed.

The catering and food group recently that the café was losing approximately € 700,000 a yeardue to grossly excessive rents and that 25 jobs had been lost in the café since the rent increase. The losses are being funded from other parts of the group, with group profits falling by 68 per cent to € 0.5 million in 2011.

1 Bogus notion that supply will cure our housing woes
2 Irish companies restrict travel over coronavirus fears
3 Suspicions rife as key Brexit trade talks begin in Brussels
4 Corona beer firm reeling after 8% slide due to coronavirus
5 Bank leaked my loan request to family who tried to rip me off
6 Life as a Facebook moderator: ‘People are awful. This is what my job has taught me’
7 Coronavirus rocks financial world as hopes for containment fade
8 We have little chance of building enough homes to meet election promises
9 Coronavirus: Iseq down 11% in five days as global sell-off is worst week since 2008 crisis
10 Covid-19: Aer Lingus parent cuts capacity, unable to provide guidance
Real news has value SUBSCRIBE