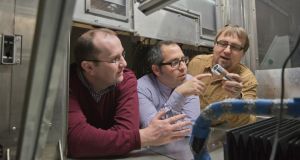 Engineers at Trinity College Dublin will lead an international study to develop a new technology that allows 3D “printing” of metal components. The €500,000 project represents the largest single research award made to the university by the European Space Agency (ESA).

Details of the four-year project were released by Trinity today. The technique will help the space agency acquire unique new engineering components with previously unavailable characteristics.

Yet the same 3D method could also be used to make the ultimate non-stick frying pan and components for the family car.

The goal is to improve efficiency and reduce the cost of a manufacturing process called “cold spray”, effectively a new kind of three dimensional printing.

The difference with conventional 3D printing, however, is that the components are metal and engineered to a very high standard.

“This is the largest ESA research project awarded to Trinity, and we will bring cold spray to the next level,” says Prof Rocco Lupoi who leads the project. “We want to make cold spray cheaper without losing performance,” says Lupoi who is assistant professor in mechanical and manufacturing engineering at Trinity.

Technical problems to be overcome include delivering a fast process that remains highly precise and reducing the current high cost of cold spray manufacture.

“It is a challenging project but there is a detailed technical plan approved by ESA that will address all of these issues in a four-year period.”

3D printing is nothing new, making an object by applying layer after layer of material to achieve a final shape. Current technology mainly works with plastic.

Cold spray printing is different: it can make finely engineered metal parts while working at room temperature. Bonding does not rely on heat, and it needs no special environment to allow bonding to take place. Low temperatures are useful in a metallic environment because there is no heat-related distortion or damage to the components.

There are other pluses for cold spray, Prof Lupoi says. It is not polluting and it doesn’t rely on toxic materials to make it work, only pure non-toxic helium.

Less raw material is needed with cold spray technology making it “less wasteful and more environmentally friendly”, he argues. The general term for it is “additive manufacturing” he says, an approach ranked as a top 10 breakthrough technology by MIT’s technology review.

“Engineering components usually start with a large piece of metal and this is reduced to the size and shape you need,” says Prof Lupoi. “Cold spray works like a painting machine, applying layer after layer to build up a shape, but done in a matter of seconds.”

The key to this technology is speeding up the sprayed material to supersonic speeds, twice the speed of sound in fact or 2,472km per hour. Helium gas is used as a carrier of the metallic particles that you want to apply.

“You accelerate the gases to supersonic velocity and if you inject particles into the gas they will also reach supersonic speeds,” he explains.

“The particles are moving fast enough to penetrate into the surface and bond in a quick way so you can build up say five millimetres of material in a mater of seconds, 1,000 times faster than other techniques.”

Nor does it matter what metal you are trying to apply, which means you can start with one and switch to another and then back to the first, depending on what is wanted.

For this reason absolutely unique components with special characteristics can easily be made. “One part of a component may have one characteristic while another part of the same component has another,” says Prof Lupoi. “You can make any shape and you can mix materials in it and can make it any way you want.”

You can cut costs by slowing down the spray but then the material won’t bond, it will only bounce off. “If you want very high speeds you need helium because it is a very light gas. But the cost of helium is very dear so while the process is relatively simple to do it can be very expensive as well.”

And there are engineering challenges related to making highly complex components from mixtures of materials. 3D layer-by-layer metal deposition using cold spray is new so methods have to be found to achieve the high precision required by the space industry for use in satellites and launch vehicles.

“The technique allows you to make 3D metal parts but a complex one might cost €1 million,” he says. “The concepts being brought forth in this project will specifically target these technological bottlenecks.”

This is why ESA wants Trinity and its industrial partners to make it cheaper, faster and robot controlled.

Prof Lupoi will work with Dr Shaun McFadden and Dr Anthony Robinson, assistant and associate professors in mechanical and manufacturing engineering at Trinity, along with ESA staff Prof David Jarvis, Dr Wayne Voice and Mr Andrea Amaldi. Prof Lupoi expects to have a post doctoral and a PhD researcher on the project.

The space industry is the initial target but Prof Lupoi believes that there are a vast range of applications for this technology if it can be made cheaper to run. “Some automotive parts in modern engines are difficult to manufacture using conventional methods so companies have to compromise on their designs. They see a benefit from this technique.”

And cold spray remains useful as a way to bond materials to a metallic surface. It would be ironic if that great home product from the early space race days, Teflon non-stick coating that has stopped eggs sticking to the pan for decades, was replaced five decades later by a newer frying pan technology made possible by an investment from the space industry.