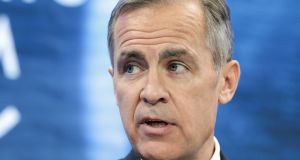 Mark Carney, governor of the Bank of England in DAvos. Photographer: Jason Alden/Bloomberg

Bank of England Governor Mark Carney said threats of jail for bankers are just a bluff and the real weapon to improve behaviour is hitting pay packets.

Mr Carney was discussing the UK’s senior managers’ regime, a response to the “relatively limited consequences” for senior bankers in the wake of the financial crisis.

It works on the basis that ignorance is no defence, and makes managers responsible for anything that happens on their watch. “If you have people doing the wrong thing and they’re not being overseen, they haven’t been trained, no remedial action, it will have consequences for compensation. And of course if it’s more serious, then it will be broader,” Mr Carney, who is a former chair of the global Financial Stability Board, said on a panel at the World Economic Forum in Davos, Switzerland.

Asked if the jail threat is real and will stop bankers being bankers, he said: “It’s a total bluff,” though he added that it may still happen to a few “on the margin.” “Where it really hits is on deferred compensation and the ability for it to be clawed back,” he said.

“Retaining that attitude and application over time as the memory of the crisis fades, that will be one of the big tests of the political reaction to this.”

Mr Carney is due to leave the Bank Of England next year. In an interview in Davos Friday, UK chancellor of the exchequer Philip Hammond said the government is open to hiring another foreigner to replace him. – Bloomberg