Laura Slattery looks at the very first business page on May 20th, 1963 and gets behind some of the stories of that first day 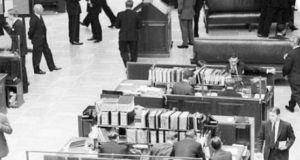 The lead story is an interview with veteran industrialist Charles Stanley (1899-1989), who was from Cappoquin, Co Waterford, and was mostly associated with a Cambridge-based radio and television manufacturer called Pye. Stanley ensured that the company, originally named Pye Radio Ltd, capitalised on both the BBC’s experiments in television in the 1930s and, in the 1950s, from the advent of commercial television. British Electronic Industries, formed in 1960 from the merger of Pye with the manufacturer Ekco, produced domestic sets, transmitters and other products.

Later, competition from Japanese electronics firms undermined its business model, and when Dutch firm Phillips acquired control of the company in 1967, Stanley retired.

2: “I asked Mr Stanley for his views on the Irish budget . . . ‘I believe the Government have been carried away by the upturn in the economy over the past couple of years. I do not think the sales tax is big enough to have any effect on spending but it should . . . not have been imposed on staple things like food and tea.’”

VAT was not introduced until 1972, but the budget that had just been delivered by the Fianna Fáil minister for finance Dr James Ryan in April 1963 was historic in that it brought in a single “sales tax” at a rate of 2.5 per cent. From the very start it was recognised that such a tax would be passed on by retailers to consumers, hitting “the weakest back and the most slender income”, as the former Labour Party leader William Norton put it.

Garret FitzGerald, analysing the budget for the newspaper in April 1963, called it “certainly one of the toughest budgets we have had to face in Ireland”.

3: “One City Editor who almost invariably ‘shifts the market’ is Nigel Lawson in the Sunday Telegraph. Yesterday, he suggested Colvilles, the £80,000,000 steel group, on the strength of new orders from Ford for its Scottish-produced sheet steel.”

Nigel Lawson, now in his 80s, is best known for being chancellor of the exchequer in the Thatcher government from 1983 to 1989. In 1963, Lawson was a 31-year-old journalist married to Vanessa Salmon, heiress to the J Lyons & Co business empire, and at this point they had three small children, the middle of whom was three-year-old Nigella.

The company he tipped in his Sunday Telegraph column, Scottish-founded iron and steel company Colvilles, was nationalised for a second time in 1967, becoming part of British Steel. It is now owned by Indian multinational Tata Steel.

4: IRISH COMPANY NEWS - Dickens Leather: “Dr A Casey, chairman of Dickens Leather, takes a confident view of the future in his yearly report to shareholders. In 1962, the company made a net loss, after tax adjustment of £22,500. But the directors now believe that most of the difficulties which the company faced in 1962 have been overcome, says Dr Casey. “He adds: ‘The scheme of reorganisation consequent on the merger with Eblana Tanneries . . .’”

1963 did indeed turn out to be a good year for the Dungarvan-based Dickens Leather (which took its name from a member of the Northampton Dickens family, still in the leather business in Britain today). After a loss-making 1962 the company swung into the black, reaching record sales levels.

So “Dr A Casey” was correct to take “a confident view” in the medium term. Dickens Leather, renamed Dungarvan Leathers in 1968, eventually became part of the Irish Leathers Group, which went into receivership in 1985, and an industry that was once a major employer disappeared.

Clarification time: It wasn‘t “his” yearly report, but “hers”. For as the finance pages noted in an April 1964 report, Dr A Casey was in fact Dr Ann F Casey, a medical doctor from Waterford and “one of Ireland’s few women chairmen”.

5: “For a time last week, the Stock Market gave signs of broaching its all-time high, but the week ended with only limited gains. The Dow Jones average of 30 Industrials bounded ahead 4.5 points after a late rally on Wednesday to reach 724.35, its highest level in 15 months.”

The Dow Jones Industrial Average has reached 724.35, “its highest level in 15 months”, it is reported courtesy of the Times Service. Up to that point, the 1960s had not been so wonderful for the index of 30 US blue-chip companies. The 1950s had been bullish. The long crawl back from the crash of the Great Depression finally ended in November 1954 when the Dow exceeded its September 1929 peak of 381.17, and the index finished the 1950s at 679.36.

But a recession in 1960 and the tensions of the Cuban Missile Crisis in 1962 had knocked the gloss off the US market’s fortunes. The year 1963 marked something of a rebound, with the Dow rising 17 per cent, and the decade went on to be a period of steady advances amid a consumer boom. In 2013, the Dow Jones Industrial Average trades above 15,000.

6: LONDON STOCK MARKET PRICES AND GROSS YIELDS “The following is a list of yields on principal securities quoted on the London Stock Exchange. The yield is expressed in pounds, shillings and pence per £100.”

The FTSE 100 benchmark index did not start until 1984, but this 1963 list of the “principal securities” quoted on the LSE contains many of the same companies, or their corporate ancestors. Oil, mining, banking, insurance and tobacco giants have proven particularly adept at surviving over the decades, with this list including British Petroleum (now BP), Royal Dutch & Shell Transport Company (which then traded separately), Rio Tinto, the Broken Hill Proprietary Company (now part of BHP Billiton), Anglo American, Barclays, Lloyds, Prudential, Legal & General, British American Tobacco and Imperial Tobacco.

Whitbread, which appears in the 1963 list under “breweries” is a member of the modern-day FTSE 100. However, it is no longer involved in brewing, having sold all its brewing interests to Interbrew (later InBev, now part of Anheuser-Busch InBev). It is now the owner of the Premier Inn and Costa coffee chains.

Imperial Chemical Industries was once a bellwether stock and pioneering maker of plastics, paints and pesticides. It went on to demerge its pharmaceutical bioscience businesses into the Zeneca Group, which later became part of the FTSE 100-listed AstroZeneca, while what was left of ICI – mainly the Dulux paints business – was taken over by Dutch firm Akzo Nobel.

The owner of Lyon’s Corner House café empire and the company that popularised the Wimpy Bar burger chain in the UK in the 1950s, was sold to Allied Breweries to form Allied Lyons, later merging with brandy and sherry producer Pedro Domecq to become Allied Domecq. It is now owned by French wine and spirits giant Pernod Ricard.

10: “Q. I have recently inherited £150 and wish to invest this in Ordinary shares . . . A. We suggest Showerings Vine Products and Whiteways – the British wine and soft drinks group formed through a three-way merger. Its products include VP table wines, ‘Britvic’ fruit juices and ‘Babycham’.”

If ever there was a good moment to own shares in the maker of Babycham, the 1960s was that time. The light sparkling perry drink invented by Somerset brewer Francis Showering was launched in the early 1950s and had the distinction of being the first alcoholic product to be advertised on British television. The drink, marketed with a jumping deer logo, went on to enjoy popularity with women drinkers throughout the 1960s and 1970s. The “Babycham” name is now owned by Australia’s Accolade Wines.

What was once a four-acre slaughterhouse and meat packing site, home to the International Meat Co, is now the rather less industrial location of the Pembroke Square apartments and Grand Canal Plaza, the Rohan Holdings office development occupied by BT, Accenture and Pfizer.

When Pembroke Square, developed by Cosgrave Homes, went on the market in 1997, the first tranche of 133 apartments with a value of £20 million were sold within two hours. The scheme was described by Irish Times property editor Jack Fagan as “one of the most successful developments launched at the upper end of the Dublin market”, with the final tally of sales exceeding £30 million.

At that time, the Grand Canal Dock Dart station had yet to be built, and Google – which would eventually become a key occupant of the neighbouring offices – was a year away from incorporation. International Meat Packers closed down in 1981. Some 30 years later the area surrounding it goes by the nickname “Silicon Docks”. Fat sows are in short supply.