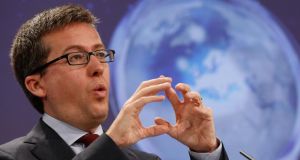 R&D investment by companies in Ireland is more than double the world average, according to new research, which bolsters the State’s claim to be an innovation hub.

The latest EU Industrial R&D Investment Scoreboard found investment by Irish-based companies increased to 13.6 per cent in 2013, above the world average of 4.9 per cent and the EU average of 2.6 per cent.

The report, which is compiled by the European Commission, based its figures for Ireland on 17 companies operating here, which are included in the global R&D rankings.

It found R&D investment across the EU grew by 2.6 per cent last year, which represented a slowdown on the previous year’s 6.8 per cent, and lagged behind the US (5 per cent) and Japan (5.5 per cent).

The report analyses the top 2500 companies worldwide, representing about 90 per cent of the total business R&D expenditure.

Carmaker Volkswagen led the global ranking for the second consecutive year with a total R&D investment of €11.7billion, representing an annual increase of 23.4 per cent. The second and third place positions in the rankings were occupied by Samsung (South Korea) and Microsoft (US).

The motoring sector, where investments continued to increase by 6.2 per cent, accounted for one quarter of the total R&D invested by the EU Scoreboard companies, the report said.

Conversely, it noted high-tech sectors such as pharmaceuticals or technology hardware and equipment have experienced weaker growth and lowered the overall average of R&D investment in Europe.

The “Scoreboard” companies employ 48 million staff worldwide last year. Between 2005 and 2013, EU based companies have increased employment by 18.2 per cent, with higher R&D intensity sectors driving that growth, the report said.

“This trend remains strong, despite the small decrease in employment (0.6 per cent) by EU companies last year,” it said.

Germany, France and the UK, account for more than two thirds of the total.

Declining investment in a few major EU companies particularly affected the R&D investment rate of their county, the report said, noting that this was the case with Nokia (-17.1 per cent) or STMicroelectronics (-19.2 per cent) which had significant impact on the overall investment in Finland (-11.6 per cent) and the Netherlands (-0.1 per cent), two of the top ten countries in Europe.

“Despite the harsh economic climate, EU companies continue to invest in R&D. That is good news, but more is needed to keep up with our competitors,”EU Commissioner for Research, Science and Innovation Carlos Moedas said.