Firms like Fiat are struggling with losses, while BMW and Audi set record returns 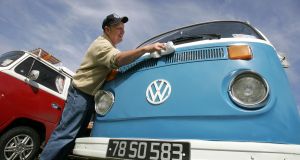 CANTILLON: Commentators who claim the recession is hitting the middle classes more than the wealthy need look no further than the motor industry for a metaphor.

Firms like Fiat and PSA Peugeot/Citroen, which have brought motoring to the masses for decades, are struggling with massive losses, while brands such as BMW and Audi are racing each other to set record returns.

The sense that the rich are ready to buy new motoring toys could also be had at the Geneva motor show, where new family models were in relatively short supply, while the headlines were grabbed by supercars from McLaren, Ferrari and Lamborghini.

Last month PSA unveiled a record €5 billion net loss for 2012. Losses at Fiat's Europe an operations reached €700 million last year with the company's factories in Italy reportedly running at just half capacity. In contrast BMW this week reported earnings rose to €8.3 billion from €8.02 billion on a 12 per cent increase in sales to €76.8 billion. At arch-rival Audi, which is part of the VW Group motoring goliath, they delivered 1.4-million cars to eager customers worldwide last year, itself a record for the company and brought home a significant €6-billion profits. So it seems that premium car makers are wallowing in profits while mainstream brands struggle to survive.

The reality is more complex. Premium brands are recording strong growth, but largely on the back of a rapid expansion of their model ranges, particularly smaller more affordable variants that are stealing customers away from what was traditionally the heartland of mainstream brands. Traditionally strong mainstream family brands are being squeezed by new entrants for Korea - such as Kia and Hyundai - while having to fend off an attack on their customer bases from the premium brands above.

However, all is not sweet profits for the premiums, which are increasingly dependent on emerging markets for growth. European new car sales last year reached a 17-year low. As VW Group chief executive Martin Winterkorn outlined last year: "VW's future is increasingly being decided in China, Russia, India, the Americas and southeast Asia. " You can take it that he's referring to Audi as well. As the one European mainstream brand to continue to record growth in Europe, it's a clear indication of the perilous state of the European car market.

BMW is currently building its first plant in Brazil, while it already has two plants in China, operating with its local partner Brilliance China Automotive. VW has 12 plants in China, with another in the pipeline.