Plan could see one and two cent coins phased out 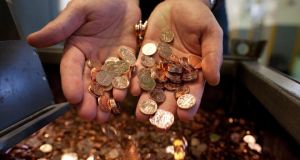 An employee drops newly-minted 2 cent euro coins into a container at the Bank of Greece’s Printing Works Department and Mint in Athens, Greece. Photograph: Simon Dawson/Bloomberg

Prices in shops should be rounded up or down in an effort to do away one and two cent coins, a report recommends today.

The National Payments Plan published by the Central Bank today also recommends the public sector stop using cheques. The recommendations are aimed at saving €1 billion to the Irish economy by increasing the use of electronic forms of payment such as debit cards and electronic banking.

The Central Bank found that one and two cent coins are not actively used by consumers and are expensive to mint. In many countrie, including the Netherlands and Finland, low denomination coins have effectively been removed from circulation through the use of the rounding rule.

The NPP says a pilot should be run in a mid-sized Irish town to investigate consumer and merchant reaction to the use of a rounding rule in Ireland. Bray, Co Wicklow, and Drogheda and Dundalk in Co Louth are in the running to be chosen to pilot the scheme.

Ronnie O’Toole, project manager of the NPP said “Customers tend to hang on to their small change so it doesn’t circulate. A one cent coin costs two cent to mint due to the rising cost in metal. They don’t buy anything as no goods or services are priced at this level and very few machines accept them.”

The recommendations in the plan include setting of a date next year at which time the public sector will no longer write cheques to or from business users.

Ireland has the second highest usage of cheques among major European countries, just behind France. Three in ten Irish people own a cheque book with with a particularly high prevalence among the elderly and the farming community. The vast majority of cheques written were written by consumers as payments to small businessess and other consumers.

Ireland has the highest ATM withdrawal per capita and still pays out half of all social welfare payments in cash.

Speaking at the launch of the plan, Deputy Governor of the Central Bank, Stefan Gerlach said: “Operating an excessively paper based payment system is like imposing an unnecessary tax on the economy, pulling scarce resources into activities which can be done more effectivelywith electronic payments.” Mr Gerlach said Ireland can and should be a leader in the payments area because it has the youngest population in Europe andis a fast adopter of new technology.

Other recommendations from the NPP include increasing the dispensing of €10 notes in ATM’s, new technologies such as mobile payments and contactles cards and modernisation of social welfare payments.

The National Payments Plan steering Committee oversaw the development og the plan and has now been approved by Government. The monitoring and implementation of the plan will continue until the end of 2014 with a target of doubling the number of electronic payments before 2015.

Chairman of the National Payments Plan and former Deputy Governor of the Central Bank, Tony Grimes said the plan would expand options for consumers and businesses.”Our vision is for a society where modern forms of payment will be universally accepted and be the preferred payment for most. However cash will remain a widely used method of payment while cheques continue to be available for those consumers who want to use them.”