Workers could have 6% of pay put into mandatory pension

State, employers and workers will all contribute to proposed scheme from 2022 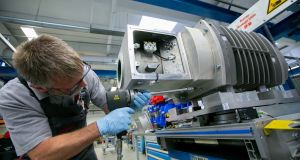 Under the proposal, all PAYE workers between the ages of 23 and 60 earning more than €20,000 will be automatically enrolled in a pension in 2022 if they are not already signed up to a scheme. Photograph: Krisztian Bocsi/Bloomberg

More than 850,000 workers will have up to 6 per per cent of their gross pay deducted and put into an occupational pension from 2022, under proposals unveiled on Wednesday.

The mandatory pension scheme is being introduced to address a stubbornly high level of workers who face retirement on nothing but the State pension. Just 35 per cent of the private sector workforce has private pensions coverage.

Under this proposal, which has been put out to public consultation, the Department of Employment Affairs and Social Protection suggests that all PAYE workers between the ages of 23 and 60 earning more than €20,000 will be automatically enrolled in a pension in 2022 if they are not already signed up to a scheme.

They would pay 1 per cent in the first year, a figure that will rise by one percentage point every year until 2027 when they would be contributing 6 per cent.

The contributions would be matched by their employer up to a salary of €75,000 and the State would contribute €1 for every €3 saved by the scheme member.

In this scenario, from 2027, workers would see a total of 14 per cent of their gross pay going into a fund for their retirement.

The department says that Ireland is one of only two OECD countries without a mandatory earnings-related element to retirement saving.

The contribution levels are contained in a “strawman proposal” – a fleshed-out draft proposal of how department officials think auto-enrolment could work. It is designed to generate discussion and the department insists it will be revisited in the context of responses to the consultation.

Employees, under the proposal, would choose from among four registered providers, selected by a new Central Processing Authority, to manage their pension and select the level of risk they wish to accept. Management charges for the funds would be limited to 0.5 per cent of funds invested. If they don’t choose a provider, one would be allocated to them.

“It is increasingly evident that most Irish workers are not saving enough, or indeed at all, for their retirement years,” said Minister for Social Protection Regina Doherty. “Many people will be faced with a serious reduction in their living standards when they retire – a fall in income they clearly do not want.”

The consultation document says, however, that it has sought to ensure that only those people who need the additional savings will be enrolled. It accepts that, for some, the state pension and other state benefits like the household benefits package, may provide enough income in retirement.

The Minister said that automatic enrolment was “perhaps the most fundamental policy reform in a generation in terms of retirement savings provision”.

Ms Doherty said the Government remained committed to the State pension, which “will remain the bedrock of the pension system and a protection against poverty”.

“However, the State pension is not designed or intended to deliver full income adequacy in retirement,” the Minister said.

Brokers Ireland, which represents almost 1,250 broker firms, welcomed publication of the consultation document. It said the contribution levels outlined were “about right” but called for its speedier implementation.

“Effectively, we’re talking about 10 years from now before auto-enrolment would be fully in place,” said chief executive Diarmuid Kelly. “A decade is a long-time in anyone’s life and such a gap in terms of proper pension planning and investment can have a very serious impact on income in retirement.”

Labour’s finance spokeswoman and former minister for social protection Joan Burton said she believed there was some reluctance in Fine Gael to expedite the scheme.

“I think there is a fear there that some people might see this as a tax,” she said. “It’s not a tax but it is another contribution.”

Ms Bruton said that much of the legwork on the pension structure had been completed during her time in office and questioned the need to delay its introduction.

“I had left all of the outline of a programme to actually start this by 2021 so I am quite disappointed,” she said.

She also questioned the “relatively low” proposed State contribution of €1 in every €3, saying it would probably have to be higher in order to be sufficiently attractive.

International experience and research has demonstrated that personal contributions of around 6 per cent of gross pay would be necessary, she said, adding that a target of individuals securing about half of their net income at retirement would be the “gold standard”.

Self-employed people, those earning less than the €20,000 threshold and people falling outside the prescribed ages could opt in.

Workers will be able to opt out but, under the worked example presented in the consultation paper, only between seven and eight months after being signed up. After that, they are committed to the scheme although they can halt contributions.

The Government is banking on the experience of similar initiatives in other countries where there has been a very low rate of opting out.

The consultation period will remain open until November 4th.

1 Major credit union plans to limit savings accounts to €40,000
2 Passengers face queuing in car parks at Dublin Airport
3 Brother is dragging his heels as executor of uncle’s will - is there anything I can do?
4 Land dispute between Citywest Hotel owner and neighbours before court
5 Penneys will not reopen on Monday despite expected changes to lockdown rules
6 Woodchester founder Craig McKinney dies
7 Revenue tells court it was entitled to raise €1.64bn tax assessment against Perrigo
8 Ikea among major retailers to reopen next week
9 Inflated GDP data set to cost Ireland in share-out of EU recovery fund
10 Credit union limit, Penneys stays shut, more stimulus and shopping for Ireland
Real news has value SUBSCRIBE
Save money on international transfers