Mortgage holders being charged up to €2,250 to exit fixed rates 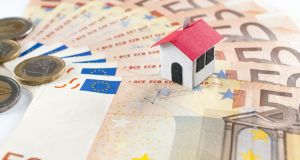 Many homeowners who locked into fixed rates some years ago are now paying considerably over the odds. Photograph: iStock

Irish homeowners are being charged as much as €2,250 to break out of a fixed rate mortgage, with AIB imposing a much higher break fee on its own customers than its subsidiary EBS does. High break fees make it difficult for homeowners who were locked into fixed rates some time ago to benefit from growing competition in the mortgage market.

According to figures published in today’s Irish Times, a property owner with a €230,000 mortgage on a five-year fixed rate looking to break out after three years will be charged as much as €2,253 by Ulster Bank to exit the contract, or €2,202 by AIB. Bank of Ireland charges around €2,000, while KBC Bank did not give a fee when asked.

Customers at State-owned bank AIB’s subsidiary EBS, however, will be charged a much lower break fee, of €1,542 on the same mortgage move. This is because both AIB and EBS apply different approaches when calculating break charges, due to “their backgrounds as independent entities in the market”, an AIB spokesman said.

Recent European regulations, which came into force in 2016, mean that banks can now only recoup what they might lose by allowing you to exit the fixed rate contract, and they can’t charge you any additional penalties. However, as our survey shows, banks are still applying hefty break fees for those looking to get out of more expensive fixed deals and lock into new, lower rates.

Many homeowners who locked into fixed rates some years ago, some at a rate of 4.99 per cent, are now paying considerably over the odds on their home loan, as mortgage rates have continued to decline. Most recently, Ulster Bank have offered a rate of 2.3 per cent fixed over two years, while other banks also offer rates of below 3 per cent.

For some homeowners, the savings of moving to a lower mortgage rate can still outweigh any charges they might incur as a result of breaking their contract. For example, someone on the aforementioned 5 per cent rate with €230,000 outstanding could save about €250 a month, or €3,000 in the first year alone, by switching to a 3 per cent rate.

1 Admission of mistake in Oxford vaccine dose raises doubts over reliability
2 Move to EU or face disruption, City of London is warned
3 Cliff Taylor: Deal or no deal we are now heading for a hard Brexit
4 Last orders for Rí-Rá and Globe as Central Hotel gets green light to expand
5 Fiona Reddan: Who’s afraid of Revolut? Not AIB and BOI it seems
6 An Post parcel volumes to hit weekly record of 3.3m
7 Central Bank rules out changes to mortgage rules during pandemic
8 Karlin Lillington: How I managed to cut my mobile phone bill by at least half
9 Energia subsidiary challenges refusal of permission for wind farm connector
10 Charting the stock markets: does technical analysis work?
Real news has value SUBSCRIBE
Save money on international transfers