Why gift a son now if it eats into his tax-free inheritance threshold? 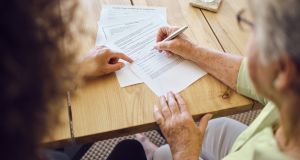 I’m wondering if there is a benefit, apart from allowing him the use of the money, to gifting money before I die.

If I could start with a question: is that not an important benefit in itself?

The Irish have a thing about inheritance. People are generally very good at trying to take care of loved ones when they die. In fact, stupidly as I see it, they will often deprive themselves in their old age, even though they have money hard-earned over a working lifetime, in order to ensure there is something left for Jimmy or Sinéad, or whoever.

But where you do plan to provide for someone – in this case a son – and you have the financial resources to do so while alive, rather than them waiting until you die, what are the pluses and minuses?

Tax is always on the minus side in people’s perception.

In the UK, a gift given more than seven years before you die falls out of the equation when considering inheritance tax. No such provision applies in Ireland.

In Ireland, there is no difference between a gift and an inheritance from a tax point of view. But there is a threshold below which we do not tax. And for a child receiving from a parent, this is currently €335,000.

So, if you give your son €100,000 as a gift, there is no tax bill but it is deducted form this threshold. Thus, the maximum he can receive tax free thereafter from his parents is €235,000.

Once he gets to within 80 per cent of that threshold, he has to let the Revenue Commissioners know and once he exceeds it, anything further that he receives from his parents – outside the annual small gift exemption limit of €3,000 – is taxed at 33 per cent.

When he receives the money is irrelevant, only when he exceeds the threshold. But when does he most need the money? If he is struggling to put together a deposit to buy his first or subsequent home, maybe the money is more use now than after you die.

And that is the benefit you have to assess – assuming you have the financial wherewithal to consider it.

So if you gift you son €100,000 now and live for a good while more, the threshold may have risen enough to ensure the gift plus and eventual inheritance of €350,000 does not breach the threshold.

The last government had a target of €500,000 for the inheritance threshold between a parent and a child. They didn’t get there despite introducing a series of more modest increases, but it indicates how things can change.

Still, nothing is certain: thresholds do normally rise but they can fall as they did during the financial crisis. That €542,544 threshold applied between January and August 2009 before falling to €434,000 later that year. Between that and 2012, the thresholds fell as low as €225,000 before starting to rise again in 2016.

So it’s not straightforward. What you don’t want, of course, is to gift your son a sum to get him up and running financially at the time it will have the biggest impact for him if it leaves you in financial difficulty. That would definitely be a minus.

Stocktake: Is the shoeshine indicator flashing red for stocks? 05:50
Elderly parents living in property you own will save you on capital gains tax 05:50
More than 40% of help-to-buy recipients already had deposit 05:42
Stocktake: Nervous investors don’t trust this rally 05:40
Most workers now expect ability to work from home part-time 05:35