Shares in both companies up 8% on news 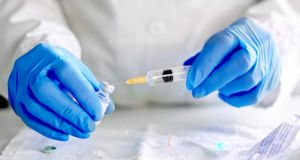 In the clinical study, 24 people between the ages of 18 and 55 who received two doses of the vaccine had “significantly elevated” antibodies within four weeks of their first injection. Photograph: iStock

A coronavirus vaccine from Germany’s BioNTech has yielded positive trial results, generating immune defences in participants that were stronger than those of the average recovered Covid-19 patient, according to preliminary data released by the company.

In a clinical study run with pharmaceuticals group Pfizer in the US, 24 people between the ages of 18 and 55 who received two doses of the vaccine had “significantly elevated” antibodies within four weeks of their first injection.

In total, there were 45 people in the study, with some receiving placebos and others getting higher doses of the vaccine.

BioNTech, the first European company to release vaccine trial results, is one of several companies using messenger RNA (mRNA) technology to develop a vaccine - a process that is faster than traditional methods.

Shares in BioNTech, which is listed on the Nasdaq in New York, rose by almost 8 per cent on news of the trial results, while Pfizer’s share price rose by a similar percentage.

Based on the initial trial results, BioNTech and Pfizer hope to progress to a larger US trial, involving 30,000 participants, within weeks, subject to regulatory approval.

Ugur Sahin, co-founder and chief executive of BioNTech, said the company was opting for a higher level of neutralising antibody responses in order to increase the likelihood that those vaccinated are prevented from spreading the disease, as well as from contracting it.

In May, Moderna of the US, a rival mRNA specialist, released initial findings of its vaccine trial, which showed that participants developed similar levels of immunity to recovered coronavirus patients, with only minor side effects.

Rather than using pathogens to induce an immune response, mRNA vaccines use genetic material that carries instructions for cells to produce proteins that fight disease. However, no marketable mRNA product has been produced to date.

AstraZeneca, the UK-based pharmaceuticals company, has secured orders from around the world for a total of 2 billion doses of the virus-based Covid-19 vaccine that it is developing with the University of Oxford and other partners.

Results of the first phase of its clinical trial have not been released – beyond a statement that it seems safe – but AstraZeneca and Oxford have moved on to the next stage, in which the vaccine will be tested on 10,000 adult volunteers to see whether it protects against infection.

Subjects in BioNTech’s US trial were injected with two doses of 10 micrograms or 30 micrograms each, three weeks apart, and were observed to have developed the highest level of potential immunity seven days after the booster injection.

However, three-quarters of those injected with a larger second dose of 30 micrograms developed a fever of 38C or above. Some participants also experienced “mild to moderate” temporary pain around the area of the injection.

“We believe that the dose could be lower than 30 micrograms, if supported by sufficient data,” said Mr Sahin. The company was testing further subjects at doses of 10 and 20 micrograms, he added, with the hope of reducing undesirable side effects.

BioNTech is one of 17 groups to have proceeded to clinical evaluation of a Covid-19 vaccine, according to the World Health Organisation.

The Mainz-based company, which has also partnered with Chinese company Fosun, is trialling four variants of its vaccine technology, and has been running another clinical trial in Germany since April. The company plans to begin a third study in Asia within weeks.

Last month, local rival CureVac, which is also developing an mRNA-based Covid-19 vaccine, received €300 million in funding from the German government, following reports that the Trump administration had sought to secure supply of the product exclusively for the US.

On Monday, BioNTech, which is also exploring whether its technologies could be used as a Covid-19 therapy, announced that it had raised $250 million (€222 million) from Temasek, the investment vehicle of the Singaporean government, alongside other investors. The company has also secured €100 million in loans from the European Investment Bank. – Copyright The Financial Times Limited 2020