Vodafone windfall: how much will I get, what do I do? 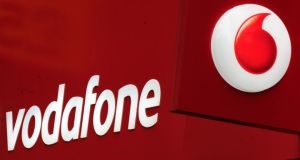 If you’re one of the 380,000 or so Irish investors who directly hold shares in Vodafone, you should have received a chunky circular in recent weeks outlining its so- called “return to value” strategy.

However, before you get overwhelmed by the amount of documentation begging for your attention, here are some simple pointers on maximising your return from the transaction.

What’s it all about?
Having agreed to sell its 45 per cent stake in the US business Verizon Wireless to Verizon, in a deal valued at $130 billion (€95 billion), Vodafone is set to distribute almost $83.2 billion (€62 billion) of this back to its shareholders in a mixture of cash (just under 30 per cent of the total approximately $23.9 billion) and Verizon shares ($59.3 billion) under its so-called “return to value” programme.

As financial adviser Simon Shirley summarises: “Investors will end up with a reduction in their Vodafone shares, shares in Verizon and cash.”

It is the latest in a line of developments for investors who originally bought into the flotation of Eircom in 1999 and subsequently became shareholders in the British telecoms giant through its acquisition of Eircom’s mobile operation Eircell in 2000.

How much
will I get?
This is the question to which everyone wants an answer.

Unfortunately, however, there is no exact answer to this at present, because the number of Verizon shares will only be fixed shortly before completion and their value will depend on their market value on the day they are issued.

Is it a windfall?
For Brian Weber, executive director with Quilter Cheviot, the benefit of the deal is that it crystallises the value of the Verizon asset, which was probably not adequately reflected in the share price previously, for shareholders.

As Shirley adds: “It’s not a windfall. This is not like free money.” Rather it’s more of a share reorganisation which is akin to Vodafone distributing an extra dividend to shareholders.

Indeed, it is important to remember that share consolidation is also part of the transaction.

This allows Vodafone to return capital to its shareholders, without seeing its share price fall, as the number of shares in issue will fall.

So, in broad terms, two Vodafone shares will become just one after the transaction, although Vodafone cannot confirm the exact ratio until closer to the end of the transaction.

In effect, this will halve the value of the Vodafone shares you hold and will also mean that your dividend entitlements will reduce – although Vodafone has indicated that it expects to pay “a growing dividend per share and a good dividend yield”.

Vodafone confirmed in November that it intended to increase the dividend per share by 8 per cent to 11 pence for 2014 (or 7.47 when the interim dividend is subtracted), subject to completion of this transaction.
So what do
I do now?
The first thing is to start making your way through the chunky documentation you will have received.

Vodafone is asking shareholders to vote on the transaction and you can do this by completing both the blue and yellow forms you should have received.

If you intend attending the meeting to be held in London on January 28th, you can use the slip on the front of the form to gain admission. Alternatively, you can submit your vote online, at vodafone.com/ courtmeeting.

Once you have finished the blue form, the next step is to complete the yellow form, which is looking for specific approval on certain elements of the deal. You can fill this out and post it back in the enclosed envelope, or again, you can complete this online by going to vodafone.com/generalmeeting.

To complete an online vote, you will need the control number, your unique PIN and shareholder reference number (SRN) which are printed on your forms of proxy.

Both these forms need to be returned by January 26th to be valid.

what’s next?
Once you have voted, you then need to decide how you want to receive the “return of value”.

The default option is the income option, or opting for C-shares, which means that you will be paid your “return” by way of a special dividend.

This will be liable to income tax at your marginal rate – so either 20 or 41 per cent – plus the universal social charge and PRSI, if applicable.

The alternative is the capital payment, or B-shares, which are liable to capital gains tax (CGT) at 33 per cent. Remember that the first €1,270 of taxable gains in a tax year are exempt from CGT, so if you pay tax at the higher rate you may wish to opt for the capital treatment. Neither option incurs a stamp duty charge.

Weber is recommending that his clients choose the capital option, as it means that you will incur a lower rate of tax.

If you opt for this, you can communicate this decision on the “form of election” you have been sent. Note that if any information on this form is wrong you can update it by logging into investorcentre.com or contacting Computershare on 01-696 8421.

You should also indicate on this form whether or not you want to receive a share certificate for the new Vodafone shares you will hold following the share consolidation.

If you wish to receive one, you must indicate this on the form of election. Otherwise shares will be held by Computershare, Vodafone’s registrar, in a corporate nominee account.

Finally, another point to consider is in which currency you wish to receive the cash – the options are euro, sterling or dollars.

Cash will be transferred to the bank account where your dividends are paid. Alternatively, you will receive the funds by cheque.

What will I do with the Verizon shares?
Once you have clarified how you wish to receive the cash bonus, the next decision you need to make is whether you want to hold on to your Verizon shares.

For Weber, if you’re simply holding Vodafone shares because you originally invested in Eircom, you probably shouldn’t hold on to the Verizon shares because of the administrative issues. Indeed, for investors with small holdings, dealing with issues such as US withholding tax on US dividends may not be worth it.

On the other hand, as Shirley notes, holding shares in the US telco Verizon, as well as the UK Vodafone, will enhance the diversification of your portfolio, as well as giving you exposure to the dollar.

If you wish to sell your Verizon shares and are eligible for the free dealing facility (ie you will hold fewer than 50,000 Vodafone shares in certificated form at 6pm on February 20th, which is the distribution record time), simply complete the “dealing form” and send it back to Computershare in the envelope provided at the Bristol address indicated by April 4th.

Most Irish shareholders should be able to sell their holdings in this manner, without incurring any dealing costs or commissions via this method.

You can’t sell some of your Verizon shareholding by this method, you must sell all, and the trade will be transacted in tranches depending on when you submit your trading form.

For example, if you submit your form indicating that you wish to sell your shareholding by February 20th, it will be sold on February 24th, with cash distribution and sale confirmations dispatched by March 4th.

This means that the date of sale will be out of your hands. If you want to exert more control and try and get the best price for Verizon, you might wish to transact the sale through your broker in the normal manner but you face charges.

You can also sell your shares in Verizon with Computershare after the free dealing period, although you will incur a charge of 1 per cent of the transaction, or a minimum of £20 (€24).

What happens
if I do nothing?
If your documentation is heading for the recycling bin and you intend doing nothing, you will simply receive the “income option”.

You will receive your cash entitlement directly, incurring income tax on it, and you will also become a shareholder in Verizon.

Remember, however, that as an Irish shareholder it may be a more attractive option to choose the capital tax treatment outlined above.


Worth remembering: Share dates
January 26th
The deadline for the return of the two voting forms.

February 19th
Vodafone will disclose the amount of Verizon shares to which you will be entitled, followed by the cash amount at the completion date on February 21st.

February 20th
The deadline for return of the form of elec- tion, which allows eligible shareholders to elect to receive the return as capital or income, in different currencies and whether to receive new share certificates. (If shareholders do not return this form, they will automatically receive income tax treatment.)

February 24th
The first day of trading of new ordinary shares following completion of the transaction and share consolidation. The settlement of Verizon shares.

March 4th
Cash payments and statements and/or certificates will be issued.

April 4th
The deadline for return of the dealing form if you are eligible to use the free dealing facility to sell Verizon shares.