The financial lessons of ‘Game of Thrones’

You may think the popular TV show is about revenge, but it’s really about property, say financial experts who offer five financial lessons based on the show 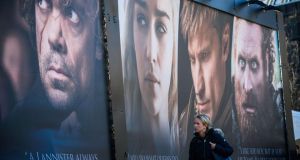 Powerful money managers are getting drawn in to the “Game of Thrones” franchise and say it offers valuable lessons on money. (Photograph: Jonathan Nackstrand/AFP/Getty Images)

If you ever find yourself at a fan convention for the popular HBO series “Game of Thrones,” look at the person next to you.

With nearly 20 million total viewers for the series, whose fifth season debuts on April 12, and 25 million copies in print of the George R.R. Martin books, the “Game of Thrones” franchise does not just appeal to comic-book geeks.

Powerful money managers get drawn in too, like Gavin Baker, head of Fidelity’s $13 billion OTC Portfolio fund. Since Baker is conquering 98 per cent of his peers over the last five years, investors should be curious about the financial lessons he and others are drawing from “Game of Thrones.”

Here are a few of the key takeaways, other than the ultimate lesson of the bloody series: valar morghulis (“All men must die”).

Lesson One: Listen for weak signals

“Be open to evidence that suggests that your view of the world is wrong,” advises Baker. In the seven kingdoms of Westeros, the powers-that-be tend to dismiss the dangers gathering around them, such as the mysterious and vicious White Walkers to the north, and the fire-breathing dragons that are growing across the seas.

In the next book - which Martin is toiling on right now - one can only assume that these adversaries will come back to haunt those in power.

As behavioral economists always tell us, mixing emotion and investing is a bad idea.

So it is in Westeros. When the Stark family goes to war with the Lannisters, Robb Stark falls in love and breaks his previous engagement to the daughter of a powerful ally. “Meanwhile, his rival, Tywin Lannister, makes very few emotional decisions,” says Baker.

Guess who comes out ahead?

Stark falls after being stabbed in the heart.

“He makes an emotional decision; that is the reason he dies,” Baker says.

Lesson Three: Leverage what you have

Near the beginning of the series, Daenerys Targaryen - the so-called Mother of Dragons - has “no money at all,” says Michael Anderson, a financial planner with True North Advisors in Dallas. She is widowed and wandering foreign deserts.

What she does have, though, is a fast-growing trio of dragons, the likes of which have not been seen in the kingdom for many years. She also boasts a powerful family name, being descended from a line of previous rulers.

As a result she “leverages those assets into huge gains,” says Anderson. Specifically, a fierce army that takes over several cities and threatens to return and take over Westeros itself.

Lesson Four: Too much debt is a killer

You might think that power in Westeros resides with the crown, and its gilded capital of King’s Landing. Or perhaps with the Lannister family, thanks to their land holdings and famous taste for gold (Hence the popular saying, “rich as a Lannister.”)

But according to some experts, real power lies somewhere else entirely: with the Iron Bank of Braavos, in a city across the seas.

“It is absolutely the power behind the throne,” says Lisa Woolfork, an associate professor at the University of Virginia who teaches a course on “Game of Thrones.”

“Its bankers are not sentimental, and just want to back who is going to win.

“When you are in deep debt to the Iron Bank, it can weaken your hold on the throne. And when you can’t get any more loans from them, that becomes a problem.”

Being a favorite of the Iron Bank of Braavos is one path to wealth. Another path: real estate.

To wit, the Tyrell family controls much of southern Westeros, and their land is essentially the breadbasket for the seven kingdoms. They, in turn, help prop up the Lannister regime, even funding a wedding between the two families.

“Real estate is a key to real power,” says Woolfork. “It’s the basis for most wealth, and converts into military power.”

Indeed, without land in the world of “Game of Thrones,” you are of little consequence.

“Everyone thinks ‘Game of Thrones’ is about revenge, but it’s really about property,” says Anderson. “You don’t win anything without gaining ground, and controlling it.”