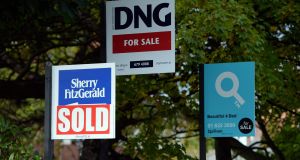 Help to Buy would offer a down-payment of €15,000 for the home, while the buyer could then access the other €15,000 from their pension fund, meaning that they could transition from the costly rental market to their own home much easier. Photograph: Cyril Byrne

First-time buyers struggling to get on the property ladder could see themselves buying their first home - without having to save anything for a deposit - if a new proposal passes muster with the Minister for Finance come budget day.

In its pre-budget submission ahead of Budget 2020, Brokers Ireland, the representative body for over 1,200 brokers across the country, wants the Government to allow first time buyers to be able to draw down a tax free lump sum from their pension savings which would enable them to buy their first home.

At present, pension savings are typcially locked away until someone is 60 or 65, although early access is possible on some schemes from the age of 50.

The new scheme however, would work in tandem with Help to Buy, and would mean that those who qualify for the Government’s rebate of 5 per cent of the purchase price of a new build, would also be entitled to a once-off draw-down from their pension fund of up to €20,000. Such a move would allow someone buying a new home for €300,000 for example, effectively buy the property without touching their deposit account, or relying on gifts from friends and family. Help to Buy would offer a down-payment of €15,000 for the home, while the buyer could then access the other €15,000 from their pension fund, meaning that they could transition from the costly rental market to their own home much easier.

Akin to New Zealand’s KiwiSaver auto-enrolment scheme, which allows savers to withdrawsavers to withdraw all of their retirement funds apart from $1,000 (€ 571) once they’ve been saving for three years and have never owned a home, early withdrawals would apply on a once-off basis and would be capped at €20,000. In New Zealand, the cap is about €23,000.

While allowing early withdrawal would help alleviate the challenges of saving for a deposit at a time of record rents, it would mean that people would be diminishing their pension pots for retirement. As the association acknowledges, pension coverage among the under-35s is already low. In addition, drawing down money tax free now, would see a reduction in the € 200,000 lifetime limit on pension tax free lump sums in retirement.

Other recommendations made by the financial and insurance brokers’ association include removing the 1 per cent life assurance premium levy, which was introduced on a temporary basis in April 2009; retaining the marginal rate pension tax relief rather than replacing it with a standard 30 per cent rate; and recommence indexation of the standard fund threshold limit.

The latter means that once pension savings go over the limit of €2 million, “chargeable excess tax” applies. While indexation of this limit once applied, it has not now actually been indexed since 2009, despite earnings grwoth in the interim.

As such, Brokers Ireland say that indexation of the limit to recommence from 2020 onwards, “in line with the growth in average public service earnings”.