Six things every woman needs to know about the State pension 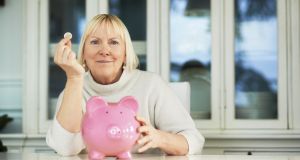 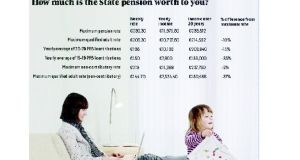 Women work outside the home in fewer numbers, they get paid less when they do work and, when it comes to retirement, women typically have 35 per cent less to live on than men.

Yes, the past four decades have witnessed a seismic change in women’s participation in the workforce but, and it’s a big but, women are still financially less well off than men, and given the impact of maternity, parental and other caring roles, women will likely continue to have a fractured relationship with work. This means that when it comes to retirement, women will continue to fare worse than men.

While much attention is given to the gender pay gap (about 14 per cent in Ireland), the problem is far more pronounced at pension age, with women earning 35 per cent less than men in retirement, figures from 2013 show.

While this is better than the 47 per cent gap in Luxembourg, it’s far greater than Denmark’s 19 per cent.

One way of narrowing this gap is to ensure more women qualify for a full contributory State pension.

While there are fears about its future viability, one fact that might whet your interest is this: to replace the State pension in its current form, you would need a fund of about €250,000.

It’s one of the biggest entitlements you will ever get, far in excess of anything you might earn via maternity benefit, jobseekers’ allowance or even child benefit. So don’t let your benefit be whittled away by failing to take action to ensure that you qualify for the top rate of pension.

As Orla O’Connor, director of the National Women’s Council of Ireland notes, it’s a common problem. “We would have a lot of women phoning us, with two to three years to go to pension, now realising they won’t be entitled to full pension”.

So what can you do to ensure you won’t be one of those women?

1) Know what you’re entitled to

As the table above shows, the top rate of the State pension currently pays out €230.30 a week. But not everyone is entitled to this, and depending on your level of contributions, you may find that you only qualify for a lower rate.

This means that a generation of women are either on reduced pensions, as they don’t have enough contributions to qualify for the full rate, or get one as a “qualified adult” which is related to their husband’s pension – and is not a payment in their own right.

To assess how your contributions are stacking up, you should request your record from the Department of Social Protection:www. welfare.ie/en/pages/secure/ RequestSIContributionRecord.aspx. Once you have this – and be warned it’s not very easy to make sense of – you can ring the department for guidance on whether or not your contributions will be enough.

O’Connor would like to see a similar approach to pension statements in Ireland as is taken in the UK, where these statements are sent out automatically and are easy to understand.

“It shouldn’t be something you have to ask for,” she says. “You should be getting it every two or three years.”

With the State pension a considerable burden on the country’s finances, Ireland made a move in recent years, much like other countries around the world, to push out the age at which you are entitled to the weekly benefit.

This means that if you retire before 2021, you will be entitled to the State pension at the age of 66, up from 65 previously. Thereafter, the qualifying age will rise again, up to 67 from 2021, and 68 in 2028. It has a considerable financial impact, leaving you short up to €35,000 that you would otherwise have been entitled to. So, if you were born anytime after 1955 you’re going to have to wait at two, if not three, years more than pensioners today to get your pension.

If you’re able to stay in your job, this change may have little impact on you. But as of yet, employers have not responded in large numbers to the change, meaning that you may be forced into retirement at the age of 65. This means that you have may have three years in the wilderness so to speak, when you’ll have to fund your living expenses either through private pension savings, or by signing on for jobseeker’s allowance.

Introduced in 1994, the homemaker scheme makes it easier for women – and men – who have spent a number of years outside the workforce caring for children to qualify for a contributory State pension.

This means that if you decide to take some years out of the workforce following the birth of your children for example, this scheme helps protect your contributions by disregarding any years spent providing full-time care for a child under 12, or a disabled person over the age of 12. Up to 20 years can be disregarded when the yearly average number of contributions for a contributory pension is being calculated, which can help you qualify for a pension, or a higher rate of pension.

Typically, you won’t have to apply for it: if you are already claiming child benefit, carer’s allowance or carer’s benefit, or a respite care grant, you will automatically be entitled to it. Normally, child benefit is registered in the child’s mother’s name.

But you have to return to work for the homemaker’s scheme to be effective. According to the department, while you are not obliged to return to the workforce immediately after the homemaker period ends (ie after 20 years), if you have an insurance record gap of more than two years the credited contributions you earned during your homemaker period can’t be used for pension assessment purposes until you go back to work again, and pay a minimum of 26 contributions.

So, to avail of this scheme, you have to re-enter the workforce at some point. Credits are only given for part of the first year, and part of your final year “homemaking” but O’Connor and the NWCI would like to see the scheme changed so that, rather than disregarding the years women spend outside the workforce, they would instead be credited for them.

Another issue is that the scheme only goes back to 1994, which precludes women who worked in the home prior to this from benefiting from it. The NWCI would like to see it backdated to 1970.

If you take time out of the workforce (for maternity or parental leave), your employer may continue to make pension contributions on your behalf. But what happens to your State pension?

First of all, if you’re not getting paid during maternity leave, then you won’t be paying PRSI, and you won’t be building up credits for your State pension. However, you may qualify for credited contributions, which are just like the PRSI contributions you pay while you are working.

If you get maternity benefit, you will get credits automatically. However, as this ends after 26 weeks, if you take a further 16 weeks unpaid leave you will need to get your employer to complete the application form for maternity leave credits when you return to work.

According to the Department of Social Protection, while a credited contribution per week is allowed during this period of unpaid leave, “this additional credited period must be applied for on the person’s return to work”. So, don’t just assume that your payroll department will apply on your behalf, check if they have done so to ensure that your record remains intact.

When it comes to parental leave, you should also be entitled to credits – but again, you have to apply for these. Parents can take 18 weeks of parental leave, which is typically unpaid, for each child up to the age of eight and they are entitled to a credit for each week of leave they take. So make sure your employer writes to the client eligibility services unit at the Department of Social Protection in Buncrana, Co Donegal, confirming the duration, number of weeks and dates of your parental leave.

5) ‘Mumpreneurs’ need to watch out

Many homemakers turn to ad hoc work to boost their income while looking after the family. If you are self-employed and earn less than €5,000 a year, you won’t be paying S-class PRSI contributions, which means that you won’t be building up a State pensions record. However, you can become a voluntary contributor for €500 a year (note until 2013 it was just €253).

To check if you are eligible to enhance your pension – and remember qualifying for the full pension may mean a lot in retirement (see table) – you can contact the department’s voluntary contributions section: (www.welfare.ie/en/Pages/ Voluntary-Pay-Related-Social-Insurance-PRSI- Contributions.aspx)

6) You may qualify for a pension through your spouse

If you are married but don’t qualify for a pension in your own right, you may be entitled to get an increase on your spouse’s pension, known as a “qualified adult” pension. This is offered at a lower rate of up to €145 a week.

However, the payment is means-tested and some women may struggle with the concept of continuing to be dependent on their husband in retirement.

“Women really feel that their contribution to society is not being recognised,” says O’Connor. “They feel it’s extremely unfair, and a loss of dignity.”

One way this payment has changed in recent years is that since 2007, the “qualified adult” can apply to have the payment paid directly into their account.