Quicksilver markets: investors ignore signs of turbulence at their peril 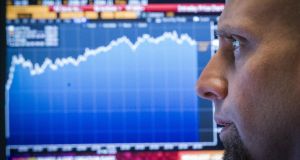 Since 2009’s market bottom, earnings have soared but actual sales growth has been relatively modest. Increased profits have been made possible by record profit margins of 9.2 per cent. Photograph: REUTERS/Brendan McDermid

US stock markets appear dangerously overpriced, and investors should remember that “quicksilver markets can turn from tranquil to turbulent in short order”.

Sceptical investors have been warning as much for some time now, but this latest note of caution is different: it comes not from a perma-bear or an underinvested hedge fund manager but from the Office of Financial Research (OFR), a US government body set up in the wake of the 2008 financial crisis to watch for signs of potential financial instability.

Established under the Dodd-Frank Act, 2010 with a mandate to “shine a light in the dark corners of the financial system to see where risks are going”, the OFR warns that the six-year bull market has “persisted much longer and prices have risen much higher than most historical bull markets, despite a weaker-than-normal macroeconomic recovery”.

With stocks having more than tripled since March 2009, three important valuation metrics are now “nearing extreme highs” only ever seen at major market peaks in 1929, 2000 and 2007.

The Q-ratio – a measure devised by Nobel economist James Tobin that measures market assets in relation to market value – “suggests a similar message of equity valuations approaching critical levels”. The current Q-ratio is the highest since 2000 and the second-highest since 1951.

Thirdly, the S&P 500’s cyclically adjusted price-earnings ratio (Cape) stands at 27, the report notes, compared with its historical average of 17 and higher than 94 per cent of historical readings.

Nobel economist Robert Shiller cautioned recently that the current Cape ratio was even higher than that seen at the 2007 market peak. He has begun rotating his own portfolio out of the US and into cheaper markets in Europe.

With all three indicators, the highest investor returns have followed periods of low valuations; the lowest returns were recorded in the aftermath of high valuations.

Other metrics such as forward price/earnings ratios, the report says, suggest equity valuations are reasonable, but it contends they “do not tell the whole story”. One-year earnings, for example, are very volatile and may not be sustainable.

Of course, Cape, the Buffett indicator and the Q-ratio are similarly imperfect, and the report notes that averages based on a long time period “may have less relevance today” due to changes in accounting standards and corporate taxation policies.

The Buffett indicator, for example, has an “upward bias” as US companies have increased their foreign earnings over time. Similarly, many strategists contend that while Cape was once a valuable valuation signal, various changes over the years have rendered it obsolete or at the very least in need of tweaking.

The report argues, however, that the various caveats “do not invalidate the usefulness of these metrics”.

No two market cycles are identical, but history “provides important lessons in interpreting trends and outliers”. Analysts tend to think the good times will last forever, “ignoring history and the forces of mean reversion”.

This increase has been driven partly by favourable secular trends. For example, low-margin sectors have fallen from 39 per cent to 22 per cent of S&P 500 market capitalisation since the 1970s, while high-margin sectors such as technology and financials have risen from 23 per cent to 50 per cent.

However, cyclical factors have also played a part in boosting profit margins, and many – low interest rates, low labour costs, cost-cutting initiatives – are not sustainable, the OFR warns.

Additionally, the most profitable industries eventually attract new competitors, thereby reducing margins over time. As value investing icon Jeremy Grantham likes to warn, profit margins “are probably the most mean-reverting series in finance . . . If high profits do not attract competition, there is something wrong with the system”.

Again, a contraction in profit margins does not guarantee a bear market. After all, the bull market could continue if margin pressures were offset by revenue growth.

Similarly, none of the aforementioned valuation metrics is a useful market-timing indicator.

Markets, the report notes, “may remain undervalued or overvalued for very long periods”, with the timing of market shocks being “difficult, if not impossible, to identify in advance”.

The problem is more that today’s seemingly high valuations “imply that investors underestimate the potential for uncertain events to occur”. Furthermore, the report warns that extreme valuations can result in financial instability, as was witnessed in the aftermath of the 1929 and 2007 market peaks.

Overall, it’s likely that any market selloff would only have “moderate” implications for financial stability, the report concludes, although it cautions against complacency in this regard.

That seems like a reasonable conclusion, given that the ongoing bull market has never been characterised by the kind of bullish excess evident during past rallies. Retail investors, burned by fearsome bear markets from 2000-02 and 2007-09, have been wary of stocks throughout most of the last six years.

Similarly, institutional investors are cautious, with the latest Merrill Lynch monthly fund manager survey finding that a net 19 per cent are underweight US equities – the biggest underweighting in more than seven years.

After all, the OFR says current valuations are now almost two standard deviations above historical averages – that is, just short of bubble territory. Continued equity gains, unless accompanied by an unexpected earnings surge, would mean that a frothy market becomes a bubble. Bubbles tend to be followed by crashes, “some of which have contributed to systemic crises”.

This may all seem a little fanciful, given the current market calm, but tranquility can quickly morph into turbulence in “quicksilver markets”, the OFR concludes. It points to 2006, which was characterised by low volatility and record profit margins before the business cycle took an abrupt and unexpected turn for the worse.

One never knows for sure what the future will bring, but the lesson of history is that “high valuations carry inherent risk”. It’s a lesson investors ignore at their peril.

1 Ten of the most mysterious aircraft disappearances
2 Nine Goodman companies made largely untaxed profit of €170m
3 What will the office market look like after the great remote working experiment?
4 San Leon acquires 10% stake in new Nigerian oil exporting infrastructure
5 Paying off your mortgage in full not always the best plan
6 Link’s €200m merger with Pepper Ireland parent to be investigated
7 Meet the Offaly man in line for a €58m bonus in new role at BooHoo.com
8 Financial ombudsman warns consumers of attempted scam
9 Wirecard was looted before collapse, German prosecutors suspect
Real news has value SUBSCRIBE
Save money on international transfers