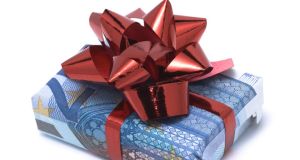 The bottom line, for you, is that gifting your son the €1,000 should not impact his eligibility for Jobseeker’s allowance. As it is below the €3,000 annual small gift threshold, it will also have no impact on his ability to inherit from you down the line without paying tax

How much savings can a person have before the dole payments are reduced? We would like to give each of our three children €1,000 but one is on the dole and moving back home because of rent increases and we don’t want to upset anything.

Whether your son has to face a means test depends on whether he is in receipt of Jobseeker’s allowance or Jobseeker’s benefit.

The latter is paid on the basis of the unemployed person having accrued sufficient social insurance payments (PRSI) while working before lapsing into unemployment. In that case, there is no requirement to disclose means as the payment is being made on foot of his previous social insurance contributions.

I am assuming, however, that your son is getting unemployment allowance. This does not rely on previous PRSI payments but is subject to a means test.

A couple of issues arise in that situation. First, any means test takes a look at the totality of his income, including all cash income (with some exceptions that generally relate to social welfare payments) as well as any “capital” he might have. Capital includes things like investment property and other investments but, in your son’s case, relates most particularly to savings.

Clearly the €1,000 is unlikely to impact on your son’s means test unless he already has fairly substantial savings.

A second consideration for you is the whole issue of your son returning home to live with you. This raises the issue of what is quaintly called the “benefit and privilege” your son gets by virtue of living with his parents. More colloquially, this could be referred to as the benefit he gets in board and lodgings.

Essentially, if your son is under the age of 25 and living at home, it is your means as parents that are assessed alongside his own. That clearly could have a far more fundamental impact on his Jobseeker’s allowance payment than any likely savings.

Interestingly, this arises only where someone lives with their parents and not if they reside with a sibling or other relative – or a non-family member.

Even if he is younger than that but has been living independently away from home for at least three years before returning to the family home, a flat rate assessment of “privilege and benefit” will be levied at €7 a week, regardless of parental means. You say he has been renting away from home for a time, so this may apply.

Also, though it does not seem from your letter to apply in your son’s case, if he is living with a partner or spouse, it is only their means that are relevant, not yours, even if they are living in your home.

The maximum your son can receive in Jobseeker’s allowance under current rates is €188 a week, though this can be reduced on a sliding scale depending on means.

Under the rules, your son is obliged to notify the Department of Social Protection of any material change in his financial circumstances – and moving home would certainly qualify as that.

The bottom line, for you, is that gifting your son the €1,000 should not impact his eligibility for Jobseeker’s allowance. As it is below the €3,000 annual small gift threshold, it will also have no impact on his ability to inherit from you down the line without paying tax.

Borrowing from a sibling My son could get a loan of €80,000 from a sibling in Germany to help with a house purchase. I note from previous columns that this cannot be an interest-free loan but would have to be at a “commercial rate”.

Would it be necessary to have a formal legal agreement between lender and borrower for taxation purposes?

This has become quite an issue for parents, and others, looking to help out friends or relatives without falling foul of inheritance and gift tax rules under the Capital Acquisitions Tax regime.

As far as I can tell, there are no rigid rules in place; it is more a case of Revenue needing to be satisfied (if it comes to their attention) that the transaction is indeed a loan rather than a gift.

I do not believe there is any need for a legal agreement between your two children to arrange this loan. That is not to say it might not be a sensible thing to do, given the sum involved, but that is a matter for the two of them and, of course, there would be added expense involved in getting a legal agreement drawn up.

Which rate? Again, there are no hard and fast rules of which I am aware. I think you would be looking to compare with lending rates rather than deposit rates. But there is nothing to say it must be Irish rates as, theoretically at least, it is possible to borrow from anywhere within the EU.

I would suggest your children not get too caught up with the minutiae. Revenue simply wants to be comfortable that people are not “gaming” the gift tax regime (which has clearly been happening in certain cases). If both parties see it as a loan and there is an interest element involved, then you should be fine.

If no interest were involved, the €80,000 can still be a loan with gift tax relating only to the notional interest forgone – and, even on €80,000, much of that would fall under the annual small gift exemption of €3,000 which your German-based child is entitled to gift his Irish-based sibling annually.

1 Italy threatens Ryanair with flight ban for alleged Covid-19 violations
2 Sacrificing pubs for schools: Ireland’s latest Covid trade-off
3 Elderly parents living in property you own will save you on capital gains tax
4 Contractors working at Facebook’s data centre sent for medical tests
5 Is it possible to get fit while sitting on your sofa?
6 More than 40% of help-to-buy recipients already had deposit
7 Get ahead at work in a pandemic: six tips from Wall Street interns
8 Unemployment rate drops to 16.7% in July
9 Food traceability company Identigen acquired by MSD
10 Why Irish households are not, after all, among the best off in the EU
Real news has value SUBSCRIBE
Save money on international transfers