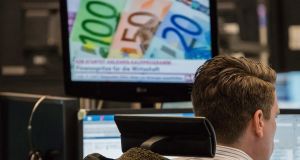 Looking to beat the market? Well you’ll pay for it; active fund managers took home three-quarters of the value they created for pension scheme clients according to a new survey. Photograph: Martin Leissl/Bloomberg

P ension schemes that used active fund managers over the past quarter of a century were rewarded...but only by 16p a year for every £100 they invested.

Active fund managers took home three-quarters of the value they created for pension scheme clients, according to analysis carried out for FTfm by CEM Benchmarking, which evaluates investment performance and costs. “A lot of value that is being created has been returned to the asset management industry rather than to the pension funds and their members,” said John Simmonds, principal at CEM.

CEM compared how the pension funds’ portfolios would have performed if passively invested, based on their asset allocation strategy, and showed active managers beat the market by 60 basis points, of which 44bp was consumed in costs.

The findings come at a time when fund companies are under intense pressure from regulators, investors and campaigners to show the value they provide. The rise of passive investing, along with transparency-driven regulations such as Mifid II, have led to a re-evaluation of the worth of active management.

Last year the UK’s Financial Conduct Authority released an influential report on the fund industry and said it would force managers to consider the value for money they deliver to investors.

More than 8,000 pension funds worldwide gave CEM information on how much they pay for investment and administration services. The median size of fund was £7 billion.

“Of course, managers should not be seeking to take 75 per cent of the value they add,” said Stuart Dunbar, director responsible for relationships with financial institutions at Baillie Gifford, the UK active investment specialist. He said the managers’ take should be about a quarter to a third of the value they create.

“If the average manager only outperforms by 60bp, there is a big question as to whether — for all the research, governance and monitoring involved in hiring active managers — it is worth it.”

Mr Dunbar said research showed there were three characteristics of active managers that led to better outcomes for investors: the more their holdings differed to their benchmark, known as having a high active share; having a low turnover of stocks; and keeping costs down.

Since 1991, when CEM began collecting data, there have been eight years where active managers had a negative net value add, meaning they took more money in costs than they added in value.

Mr Simmonds said the overall news was good for pension funds as active managers had added value over the long term. “Sixteen bps compounded over many years is a substantial amount of money, which is a positive for pension funds and their members,” he said.

He added though that the amount of money pension funds were paying for investment management was understated, as transaction costs would have been deducted before the returns were known.

“Most pension funds understand their returns relative to the benchmark. But when they see them compared with the wider universe it can be quite revelatory,” he said.

“There can be some ‘oohs’ and ‘ahs’ when they realise how much money is changing hands in order to access these returns.”- Copyright The Financial Times Limited 2018.

1 Player Wills site: Hines and APG to seek permission for 416 homes
2 Pilita Clark: A lot of us are losing it in lockdown – but we really shouldn’t
3 ‘I’ve so many outgoings with family life . . . it puts manners on you’
4 Developer O’Flynn calls for task force to deal with housing crisis
5 Consumer spending fall may cut indirect tax revenues by up to €6.7bn
6 Irish agribusiness ClonBio reports €95m pretax profit for 2019
7 Tax hit from Covid-19, O’Flynn’s solutions to housing crisis, and new homes for D8
8 Will remote working mean an end for the corporate HQ?
9 A Smigin of language goes a long way for well-travelled Cork woman
10 State guarantee needed for businesses that require liquidity
Real news has value SUBSCRIBE
Save money on international transfers