Paul Volcker will be missed 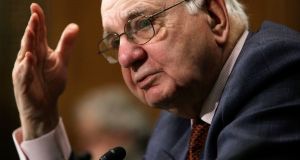 Paul Volcker. The scale of his many achievements is huge, although most tributes focused on his unshakeable integrity. Photograph: Alex Wong/Getty Images

One man who did make the world a better place was Paul Volcker, the former Federal Reserve chairman who died last week aged 92. Volcker is famous for taming inflation in the early 1980s, increasing interest rates to 20 per cent in the face of huge political pressure in order to kill off double-digit inflation. Decades later, he took on the banks during the global financial crisis. “Wake up, gentleman, your response is inadequate!” he said at a conference in 2009, complaining that he couldn’t think “of any socially valuable financial innovation since the ATM machine.” The subsequent Volcker rule (since watered down) aimed to rein in risk-taking at banks. The scale of Volcker’s many achievements is huge, although most tributes focused on his unshakeable integrity. “The greatest man I have known,” said Financial Times columnist Martin Wolf. “The greatest American hero I’ve known”, said hedge fund manager Ray Dalio. “A true public servant,” said former Bank of England governor Mervyn King. That he was. Unimpressed by money and power, Volcker’s life is a testament to the importance of having independent, steadfast central bankers and public servants.

1 Aldi to impose limits as Christmas toys go on sale
2 ‘I hate haggling because I hate when people do it to me’
3 Ryanair and Eir the worst for customer service during Covid crisis
4 Fair deal? Family at odds with hospital and each other not so sure
5 Irish elearning company LearnUpon closes €47.4 million investment
6 Irish house prices could buck European trend and fall this year, says S&P
7 Monsoon landlords win challenge over creditors arrangement that cut rents
8 First look: Is the iPhone 12 Pro the best smartphone out there?
9 How to . . . move (almost) everything to your new phone
10 Dublin’s serviced office market increased by 50% in 2018
Real news has value SUBSCRIBE
Save money on international transfers