Stocktake: ‘Too much, too soon’ for $2tn Saudi Aramco 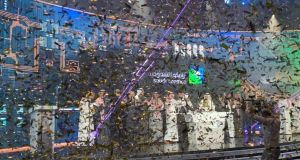 Whether it maintains that valuation is another matter. “Too much, too soon,” said analysts at Bernstein Research, who believe the company is worth $1.4 trillion. Bernstein cited doubts over earnings growth and weak oil prices, but the main cause for scepticism is the fact Aramco now trades at a higher valuation than peers such as Exxon Mobil and Royal Dutch Shell.

The company should trade at a discount rather than a premium to western oil giants, says Bernstein – a point that is hard to disagree with, given the obvious corporate governance and geopolitical concerns associated with a company that is still 98.5 per cent owned by the Saudi government.

Restrictions on short selling on the Saudi stock exchange may help keep prices afloat for now, but Bernstein is right to warn lower prices will “inevitably come”.

1 Bank leaked my loan request to family who tried to rip me off
2 Eason acquires rival Dubray Books for undisclosed sum
3 Solar panels: Are they worth the investment?
4 When the Chemistry no longer works – the closing of a leading Irish ad agency
5 What is at stake for Ireland in the new Brexit talks?
6 Digicel’s earnings rise as it looks towards refinancing $1.3bn of bonds
7 Can I see my father’s previous wills?
8 Ryanair and Aer Lingus monitor impact of coronavirus on travel to Italy
9 Fuel company loses €1.3m challenge over tax bill
10 Coronavirus leads United Airlines to withdraw profit forecast
Real news has value SUBSCRIBE
Save money on international transfers