Paid leave for dads: will Irish men take it? 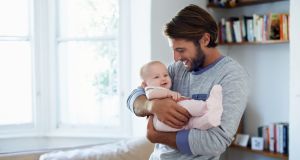 At €230 a week, the pay for fathers is the same rate of pay for statutory maternity leave. Photograph: iStock

It’s finally here. From September 1st fathers will be able to apply for two weeks of paternity leave for the first time in Ireland. It is a welcome move and one which positions Ireland closer to Berlin than Boston, with the US now one of the few outliers among OECD countries in not offering paid leave for fathers.

The question now is whether it will be attractive enough to encourage men to take the full leave to which they are entitled.

From September 1st fathers – in both heterosexual and same-sex couples – will be able to apply for two weeks paternity leave for the first time in Ireland. The leave can be taken at any point within 28 weeks of the birth or adoption of a child, and the two weeks must be taken together.

Fathers must give four weeks’ notice – in writing – to their employer indicating their intention to take the leave. However, this notice may not apply in the event of a premature birth.

The move is particularly welcome for self-employed men, who will also be entitled to the benefit, but they must submit an application to the Department of Social Protection12 weeks before the leave.

How much will fathers get?

At €230 a week, the pay for fathers is the same rate of pay for statutory maternity leave. As with maternity leave, applicants will need the requisite PRSI stamps to be entitled to it.

The benefit will be paid into fathers’ bank accounts, or it can be paid to an employer, if they are willing to top up the payment.

What is a public service card?

Fathers need a public services card to get paternity benefit. Introduced in 2012, the card replaces the social services card used to collect social welfare payments and the free travel pass. It’s usually issued when you receive a PPS number but if you already have a number, you will need to apply for the card.

This means that fathers-to-be should get cracking on their applications. You get the card by registering for a Safe (Standard Authentication Framework Environment) at your local social welfare office. This takes about 15 minutes to complete: your photograph will be taken and signature recorded for your new card, which will be posted to your home.

From September 1st, 2016 fathers are able to take two weeks' paid paternity leave. Leave must be taken within 26 weeks of birth/adoption. Social welfare payment is the same as maternity benefit at €230 a week. Employers may top-up payment to full pay but are not obliged to do so. Fathers must apply in writing four weeks before leave and must apply for a public service card to be entitled to leave.

If you are receiving welfare payments from the Department of Social Protection (DSP) you can apply for your card through the post.

Will employers top up the payment?

Many companies already offer some form of paternity leave. Maeve McElwee, head of human resources in employers’ group Ibec, says about a quarter of companies have something in place. They will typically offer in the region of three days paternity leave at full pay – not enough, perhaps, to get to grips with the shock of a new arrival. In practice, then, this has meant many fathers tried to scramble together as much annual leave as they could take, in order to spend time with their new family.

The Central Bank for example, offers three days paid leave around the time of the birth or adoption of the first child, or five days for any subsequent children, while Dublin Bus offers three days.

However, the new regime now presents the opportunity for employers to go the extra mile and offer their male employees full pay for two weeks. This will be subsidised by the €230 a week offered by the state.

But will employers go for it?

“It is costly for businesses – particularly for those businesses that have no paternity leave at the moment, they will see the biggest impact,” says McElwee.

Companies with paternity schemes already in place will likely maintain the full pay for three days or so, and allow employees claim state paternity benefit for the remainder of the time.

“How companies choose to do it will be interesting to see,” says McElwee. Indeed just because a company tops up maternity benefit, there will be no compulsion on it to offer the same approach to paternity benefit.

Where employers do offer top-ups, they are likely to come with restrictions such as those faced by women availing of maternity leave. Women typically need to fulfil particular terms of employment – ie have been in full employment for two years for example – before they are entitled to maternity leave at full pay.

The introduction of a two-week paternity leave for Ireland has been broadly welcomed but it won’t position Ireland as a leader in benefits for fathers. Indeed both Lithuania and Portugal are the star performers in

offering four weeks leave for fathers, at full pay. This compares with two weeks in Ireland at about 35 per cent of the average national weekly wage.

However, it does position Ireland alongside countries with historically strong welfare states such as Denmark and France, and puts it ahead of countries such as the US and Canada, where there is no paternity leave, and Italy, where fathers typically get just one day at full pay.

Many OECD countries also offer split parental leave, which can be shared between the mother and father. In the UK, for example, parents can split up to 52 weeks of leave between them, as well as up to 39 weeks of statutory shared parental pay. Such an approach may yet make its way to Ireland.

Will fathers take it?

“It’s very difficult to know at this stage how many fathers will elect to take the leave and whether they’ll see it as attractive or not,” says McElwee, adding that some decisions will be financially dictated, and some influenced by the culture of the organisation.

At just €230 a week, many fathers may consider the payment not enough to facilitate them taking the full two weeks off work, unless their employer is willing to top it up.

OECD research suggests that fathers’ use of parental leave is highest when leave is not just paid but well paid – around half or more of normal earnings. At just 35 per cent of earnings, Ireland is not there yet, and this may prohibit take-up.

The culture of the organisation, and the pressure that may be on parents not to miss work– as well the father’s own perception of prioritising time with his family over work – will be important.

But, if the example set by parental leave rights is anything to go by, men may not flock to take the full two weeks. Since 1998, both fathers and mothers have been entitled to take up to 18 weeks unpaid leave for each child under the age of eight. While mothers have embraced this opportunity, fathers have been slow to do so.

McElwee puts take-up rates among fathers for parental leave in Ireland at between 10-20 per cent.