Almost 15,000 new loans totalling €3 billion were extended in the period 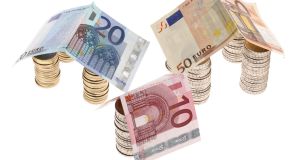 New mortgage lending of just over €3 billion by the five big banks in the first half of the year was 33 per cent up on the same period in 2016, according to new figures from the Central Bank.

Almost 15,000 new loans were extended, according to the data, which contains an examination of what happened in the market following the easing of Central Bank mortgage lending rules at the start of this year.

The main rule change was that, from January, first-time buyers now need a deposit of at least 10 per cent of the value of the property – previously they had to save 10 per cent of any amount up to €220,000 and 20 per cent above that level.

While loan-to-value (LTV) ratios have risen only slightly on average as a result, rising prices mean the average loan size and property value have increased significantly, with the average first-time buyer taking a loan of just under €200,000 and paying €265,000 for their property. This compared with an average loan of €180,000 in the first half of 2016 on a house price of €245,500.

The figures showed that banks are using their ability under the rules to give higher mortgages to a percentage of borrowers. Some 20 per cent of the value of loans to non first-time buyers exceeded the 80 per cent LTV limit for that group, according to the figures, the maximum allowed under the rules.

Meanwhile, some 18 per cent of total loans exceeded the limit of 3.5 times income which normally applies, with the majority of this going to first-time buyers.

This suggests that affordability remains an issue for many buyers, with banks using the scope to breach income limits pretty much to the maximum. Meanwhile, separate Central Bank data showed that a third of housing transactions in the second quarter of 2017 were by cash buyers, illustrating the competition in the market for those looking for property.

The figures show an overall rise of 1.4 per cent in the total amount of outstanding home loans, showing that significant amounts of debt continue to be paid off. However, there was an 8.6 per cent fall in buy-to-let lending outstanding, a figure which will concern the Government at a time when there is a shortage of rental properties.

1 The wealth of the Irish – how do your assets match up?
2 KBC Ireland fined €18.3m for ‘unconscionable’ tracker scandal role
3 Irish company to test vaccines on volunteers deliberately infected with Covid-19
4 Will Facebook walk away from European market after data protection 'hissy fit'?
5 Dunnes Stores set to enter grocery delivery market
6 Air travel never going ‘back to way it was’
7 How to upgrade your home entertainment system for less
8 Irish Fairy Door Company moves to licensing model
9 Eir takes on extra staff as ComReg chases it on complaints
10 Should I switch bank now with Ulster Bank at risk of closing?
Real news has value SUBSCRIBE
Save money on international transfers