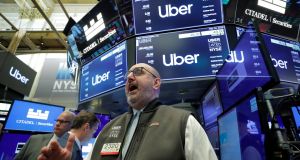 Uber launch on the floor of the New York Stock Exchange on May 10th, 2019. Photograph: Brendan McDermid/Reuters

Private equity markets have been enthusiastic backers of companies such as WeWork and Uber in recent years. However, stock markets have grown increasingly wary, as evidenced by WeWork having to pull its IPO and Uber being one of many technology companies to flop since going public in 2019.

After a decade of inflows and cheap money, are overheated private markets in trouble? There is a certain irony in that private equity markets have often been seen as a “superior form of capitalism”, to quote Yale’s David Swensen, in contrast to public markets where “the short-termism is incredibly damaging”. Trillions have poured into private equity funds over the last decade as investors bought into the idea that private equity funds’ apparent long-termism would generate both lower risk and higher returns than public markets.

However, the debacle surrounding WeWork, the shared workspace provider, doesn’t fit that narrative. WeWork’s private backers had valued the company at $47 billion, only for the IPO to be pulled, as analysts warned $10 billion to $12 billion was a more realistic valuation for a loss-making company hobbled by multiple concerns, ranging from accounting methods to corporate culture and governance standards.

As its main backer, Softbank, stepped in to rescue the business with cash running out, that valuation tumbled further, to about $8 billion. WeWork’s case is not an isolated one. Uber was valued at $76 billion in a private fundraising last year and some enthusiasts reckoned it could be worth up to $120 billion when it made its stock market debut in May.

That didn’t happen as circumspect analysts questioned the Uber bull case. Shares have continued to go south in recent months, losing a third of their value and recently sending Uber’s valuation below $50 billion – its lowest valuation since July 2015’s private financing round.

A raft of other high-profile technology companies have also flopped since going public this year and it’s not hard to see why. The average unicorn (private companies with reported valuations above $1 billion) is overvalued by about 50 per cent, according to Stanford venture capital expert Prof Ilya Strebulaev. Private markets currently appear more tolerant than their public counterparts for accounting metrics such as “community-adjusted” Ebitda, a unique and much-mocked measure employed by WeWork. This measures net income not only before interest, taxes, depreciation, and amortisation, but also “building- and community-level operating expenses” – not an ideal category to exclude, given it includes expenses like rent, tenancy costs, utilities and building staff salary costs and is, WeWork admits, its “largest category of expenses”.

What do they use? Masayoshi Son of Softbank, creator of the $100 billion Vision Fund which has invested billions in WeWork and Uber, among others, believes in going with your gut. “My first insight in the first few minutes is sometimes more meaningful than detailed calculation,” he said last year. “Yoda [the Jedi master from the Star Wars films] says use the force. Don’t think, just feel it.”

That’s an extraordinary statement – the behavioural finance literature is damning when it comes to the merits of human intuition – but again, a separate study conducted by the aforementioned Harvard researchers suggests many in private equity circles share this sentiment. In a survey of almost 900 venture capitalists (VCs), almost half said they “often make a gut decision to invest when meeting a company’s management team for the first time”. Only one out of 10 said they quantitatively analyse their past investment decisions and performance.

The researchers found “little evidence” that VCs used investment techniques taught at business schools and recommended by academic finance, while 9 per cent admitted to using no financial metrics at all when analysing investments. Valuation doesn’t appear to be a decisive factor in the minds of VCs – 92 per cent of those with unicorns in their portfolio said such companies were overvalued. None of this indicates private equity investors are especially sophisticated, but institutional investors seemingly think otherwise. Preqin’s 2018 survey of pension funds, endowments and insurance companies showed 91 per cent expected private equity returns to outperform stock markets over the coming year. A large minority – 40 per cent – expected private equity to outperform by more than four percentage points. The 2018 survey was not anomalous – in each of the previous five years, at least 90 per cent expected private equity to outperform public markets.

Why? Verdad Capital founder Dan Rasmussen, a former private equity analyst at Bain Capital who has since become sharply critical of the industry, says professional investors believe private equity firms profit by improving the companies they buy; that returns are less volatile; and that they comfortably outperform stock markets.

Claims of improved efficiencies are “largely illusory”, says Rasmussen; in more than half of buyouts examined by Verdad, revenue growth slowed and long-term investments were cut. Claims of reduced volatility are similarly illusory, he says, a point echoed in a paper earlier this year by hedge fund AQR Capital Management, which argued private firms’ illiquid assets appear less volatile due to the absence of mark-to-market accounting. As for performance, private equity used to comfortably outperform stock markets; between 1990 and 2010, private equity returned 14.4 per cent annually, says Rasmussen, compared to 8.1 per cent per year for the S&P 500.

However, the flood of money into private equity funds has resulted in increased competition and escalating prices paid for private equity assets. Rasmussen cites data from Cambridge Associates showing private equity returns lagged both the small-cap Russell 2000 index and the large-cap S&P 500 over the past five years.

Academic research confirms the downward trend. Up to 2006, US private equity funds outperformed public markets by about 3-4 per cent annually, a 2015 study found, but returns have been “roughly equal” since. The results are similar for European funds. Overall, performance is “significantly linked to capital flows”, with returns suffering when funds flow into the sector. AQR comes to the same conclusion, saying “estimates display a decreasing trend over time”.

Current valuation ratios represent a 30 per cent premium to listed companies, said Swiss investment giant Pictet earlier this year, cautioning that private equity appeared a “bubble waiting to burst”. Many firms, particularly technology companies, have been spoiled by ebullient private markets in recent years, warned venture capitalist Fred Wilson of Union Square Ventures after WeWork was forced to pull its IPO. However, a “great public market reckoning” may finally be under way.