Don’t invest in an ETF until you understand the tax 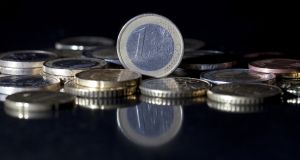 If you have opted for a life-wrapped investment product, there is nothing to be done, as the life company computes the taxes and passes them on to Revenue on your behalf. Photographer: Simon Dawson/Bloomberg

If funds are more expensive than we might have otherwise thought – as evidenced by new European regulations (insert link: https://www.irishtimes.com/business/personal-finance/my-fund-is-costing-me-how-much-investors-are-paying-twice-as-much-as-they-think-1.3397651) – then it makes sense to seek out the cheapest fund you can find.

And, given the plethora of low-cost operators in the exchange-traded fund (ETF) space, it’s no surprise that many Irish investors have sought to invest in these products via a low-cost online stockbroker. The Dutch platform De Giro, for example, offers commission-free trading in a host of ETFs. And with total expense ratios, or charges, of as low as 0.1 per cent a year, at first glance it would seem a no-brainer for Irish investors to put their money away from pricey life-wrapped products and into these low cost alteratives.

However, at second and third glance, these products may be less attractive than they first appear due to the onerous tax reporting requirements. And when it comes to regular investments, these requirements may be so onerous that for some people, they may be uninvestable.

How ETFs are taxed

Given that ETFs are traded on exchanges just like shares, an investor could understand this to mean that the fund is subject to capital gains tax at 33 per cent. However, accounting for gains on such products is not always as clear as might first appear.

This is largely because unlike life wrapped products for example, which are allowed to grow tax free for up to eight years under gross roll-up, before tax (at 41 per cent) is deducted at source, investors in ETFs need to account and pay for any tax owed on a gain on an ETF themselves.

And it’s not always clear what this tax actually is. An investor could be subject to capital gains tax (CGT) at 33 per cent; Dirt at 41 per cent; or income tax at their marginal rate, which could be up to 55 per cent.

“It depends on so many variables, such as where the fund is domiciled, and where the person is domiciled,” says Marc Westlake, managing director of PortfolioMetrix.

Typically, for Irish investors, suggests Steven Barrett, managing director of Bluewater Financial Planning, a gross roll-up approach is more attractive, such as that achieved through an Irish or EU domiciled ETF, unless you have losses which you want to offset through CGT.

“The reason behind that is that any dividends or gains are reinvested automatically without any tax liability,” he advises.

Barrett says he hears a lot about people wanting to avail of gross roll-up – and pay CGT on any gains. “But that’s having your cake and eating it,” he says.

Here’s a brief overview on how ETFs are taxed – depending on where they are domiciled.

If you opt for an Irish domiciled ETF, such as the iShares Core S&P 500 UCITS, any income on dividends, or gain you might make on the sale of an ETF, will typically be liable to Dirt, or exit tax, at a rate of 41 per cent.

While the rate of Dirt on deposits is on a downward trajectory (down to 37 per cent this year from a high of 41 per cent ), the Government has not, as yet, made a similar move on the tax applying to investments, despite strong lobbying from the inestment industry to do so.

Tax on gains: Exit tax at 41 per cent

Tax on income: Exit tax at 41 per cent

2. EU (other than Ireland) domiciled ETFs

To determine this, you can check the prospectus of the fund.

But what about EU domiciled funds that aren’t UCITS? According to the Revenue, “it is not possible to give other than a general guidance” on these, although it does say that, as most of these will be similar to non-UCITS Irish domiciled funds, they should also be subject to exit tax.

However, this may not always be the case, and investors can make a case to Revenue as to what tax rate should apply. There may be a case to be made that gains on such a fund could be subject to CGT, which is levied at a lower rate.

“It is always open to an investor and his/her tax advisers to take a different view,” the Revenue says.

Tax on gains: Exit tax at 41 per cent

Tax on income: Exit tax at 41 per cent

3: US, EEA and other OECD domiciles

While the Revenue says it can only give “general guidance” on US domiciled ETFs, it does accept that such ETFs are outside the normal regime of investment funds, and are thus subject to capital gains tax at 33 per cent on gains. Any income is taxed under income tax at your marginal rate.

Remember, income tax also means PRSI and USC, which could mean a deduction of as much as 55 per cent on any dividends you benefit from. This is also the case for ETFs domiciled in other European Economic Area (outside the EU) and OECD countries.

On the plus side, there is a tax-free allowance of €1,270 a year on gains subject to CGT, while, if you have losses, these can be used to offset taxes on other gains.

Irish investors have, however, been restricted from purchasing US domiciled ETFs since the introduction of the new PRIIPs regime on January 3rd of this year.

Both Blackrock and Vanguard, for example, say they won’t be able to provide the documentation required under PRIIPs, ie KIDs [Key Informaiton Documents] – for US domiciled funds as they don’t actively market these to retail investors in Europe.

Tax on gains: Capital gains tax at 33 per cent

For those ETFs domiciled outside the EU, EEA or OECD, the Revenue says it comes down to whether or not you have a “a material interest in an offshore fund”. If you do, and it is the Revenue’s view that you likely will, it means that both gains and dividends will be subject to income tax.

What about deemed disposals?

Typically, if you invest in an investment fund, your investment is allowed to grow tax free for eight years under the “gross roll-up” regime. But on the eighth anniversary, the so-called “deemed disposal” regime means that you must cough up any taxes owed on gains.

Now if you have opted for a life-wrapped investment product, there is nothing to be done, as the life company computes the taxes and passes them on to Revenue on your behalf.

“An insurance company will deduct money from the fund automatically and pay it over to Revenue; you don’t have to do anything,” says Barrett.

It’s for reasons such as these, Westlake says, “that for a smaller investor, investing in a non-pension wrapped product could be more attractive,” adding that while the investor will pay a “hefty premium” in terms of higher fees and charges, an ETF may require the expense of professional advice.

After all, if you’re an ETF investor with a gain, and either wish to sell it or make a deemed disposal declaration, you will first have to work out how much tax is owed on the eighth anniversary of your investment, and secondly, you will have to pay this to Revenue yourself.

But when it comes to regular savings, it gets even more complicated, as you have to work out the tax owed based on the monthly prices of buying into the fund.

“I would generally recommend to clients, accumulate a larger lump sum in cash savings and put in a bigger amount once or twice a year,” says Barrett, as a way of cutting down on the administration.

Remember, if you’ve invested in a non-EU domiciled ETF, it won’t be subject to deemed disposal as it operates under the CGT regime, so you can let your investment run on without paying any taxes until you sell it.

As the Revenue states in a guidance note, the onus is “on the investor to make a self-assessment tax return of the income and gains”. But do you need to pay for tax advice?

“I have DIYers who are quite competent and do it themselves; the thoughts of having to pay for advice sticks in their craw,” says Barrett, adding that, equally, there will be people who would much rather pay someone else to do it.

Either way, whether it’s the cost of your time or another bill, ETFs do bear an added burden, although you might still ahead in financial terms at the end of the day due to lower charges.

“Costs are generally cheaper than being in a wrapper as, while you might be writing a cheque to pay for someone, you could actually still be making more money,” he says

And remember, with ETFs, investors have an extra year to settle their tax bill, given the way self-assessed tax returns work. Moreover, investors don’t have to liquidate any of their fund to settle this tax bill. It can come out of other funds.

Where is my ETF domiciled?