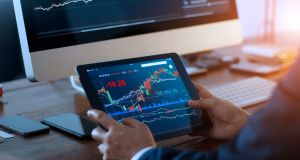 The put-call ratio, which measures the mood of the options market, is at its highest level since January 2018. Photograph: iStock

Not everyone buys into the idea that investor positioning is out of whack at the moment. Investors are not “overzealous”, protested BlackRock chief Larry Fink last week, saying “we still don’t see extreme positioning by clients in equities”. Most sentiment and technical data suggests otherwise. Among S&P 500 stocks, 85 per cent are trading above their 200-day average – the highest number in six years, notes Baird Baird investment strategist Willie Delwiche. The equivalent percentage of Nasdaq stocks is the highest since mid-2018, says Delwiche, while 73 per cent of NYSE stocks are trading above their long-term average, the highest number since markets peaked in early 2018.

The put-call ratio, which measures the mood of the options market, is at its highest level since January 2018. CNN’s Fear and Greed index, a composite sentiment tool tracking seven indicators such as the number of stocks hitting 52-week highs, momentum, volatility and safe haven demand, recently topped 90 and has been in the “extreme greed” zone for the last month. Of course, stocks have continued to climb over the last month, a timely reminder that overbought markets can become more overbought. Still, investor optimism indicates a lot of good news is already baked into market prices, suggesting indices may be vulnerable to profit-taking in the event of any unexpected setbacks.

1 How to gift your child a house deposit . . . tax free
2 BOI customers to be charged twice with bank fees on New Year’s Eve
3 Irish designer of Oxford vaccine: ‘I’ve never worked so hard in my life’
4 Son putting elderly dad under pressure to sign over land
5 Workers have little idea of the cost of retirement income
6 O’Flynn and BlackRock to double money with €100m sale of former HP campus
7 Digital bank N26 targets one million customers in the Republic
8 CRH predicts €800m charge this year related to Covid and Brexit
9 We continue to ignore massive pensions elephant in the room
10 Elon Musk unseats Bill Gates as world’s second-richest person
Real news has value SUBSCRIBE
Save money on international transfers