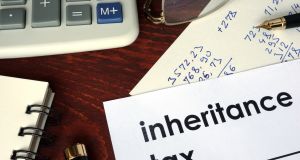 My two children inherited money from my mother-in-law. Because my husband died before her and my son was under 18, he didn’t have to pay tax. My daughter had to pay tax because she was 21.

Now they are getting another inheritance, from my father. I’m confused about the tax. Will my son still be exempt, as he was classed as category A three years ago?

Inheritance can be a complex issue, especially for situations that are outside the generally accepted norm.

The key thing in determining liability to taxation is the relationship between the disponer – the person making the gift or inheritance – and the beneficiary.

Category A, which has the highest tax-free exemption of €335,000, applies generally on gifts and inheritances from a parent to a child.

Category B, with a dramatically lower threshold of €32,500, applies to transfers between a person and their sibling, nephew/niece or grandchild. And category C, with a €16,250 threshold, applies to everyone else, including in-laws.

It is the first two categories that affect your children. The important thing here is that each category (and threshold) is a standalone silo.

When their grandmother died, they would have defaulted into category B for the purposes of inheritance. However, one of the exceptions to the general rule on thresholds relates to inheritances received by a child who is a minor from a grandparent where the intervening generation has died.

This is your son’s position. Because his dad had died and he was still under the age of 18, the inheritance he received from his dad’s mother, your mother-in-law, was considered to fall within category A which, back when his grandmother died was €310,000.

The inheritance your daughter received from her grandmother fell into the usual category, B, as she was over the age of 18 at the time.

Roll on three years and the two children are now in line to receive an inheritance from their grandfather, your dad. Your daughter’s position is unchanged. She is still treated within category B. And, as she paid tax last time, she must have exceeded the threshold which, at the time, was €30,150.

Once you cross 80 per cent of a relevant threshold, you do have to notify Revenue even if no tax is owing

It has now risen to €32,500 but she is still likely to have to pay tax at 33 per cent on most or all of the inheritance from your dad as the thresholds are cumulative lifetime ones.

Your son’s position is different. Now over the age of 18, he no longer qualifies for category A in relation to inheritances from a grandparent.

This time around, the relevant category for his inheritance is category B. But he is starting from scratch as each threshold is standalone. As this is his first inheritance under category B, he will only pay tax if his inheritance from your dad is more than €32,500.

Bear in mind that once you cross 80 per cent of a relevant threshold, you do have to notify Revenue even if no tax is owing.