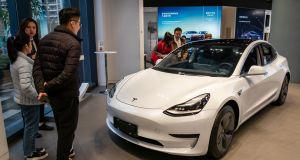 In a rapidly-rising stock market, almost no stock has been rising quite as rapidly as Tesla. The electric car maker topped $500 (€449) last week, soon soared to almost $550 before quickly falling back below $500 after Morgan Stanley issued its first sell rating on the stock within seven years. Understandably, the bank questioned the “sustainability” of the momentum surrounding Tesla. The stock gained 30 per cent in the first two weeks of 2020, has more than doubled since October and, prior to Thursday’s dip, had more than tripled since bottoming at $177 last summer. The soaring share price, fuelled by excitement surrounding surging Model 3 deliveries and the start of production in China, means Tesla is now worth some $90 billion – more than the combined value of Ford and General Motors. Is it worth it? Not according to analysts – the 29 analysts offering 12-month Tesla price forecasts have a median target of $350. Holger Zschäpitz of the German daily Die Welt tweeted last week that Tesla’s market capitalisation equates to over $261,000 per car sold, compared to less than $22,000 and $13,000 for BMW and Volkswagen, respectively. Of course, arguing about Tesla’s valuation has proved a costly exercise for the army of short sellers who have been at war with the stock for years now. Since 2016, shorts have lost about $11.44 billion betting against Tesla, according to financial analytics firm S3 Partners, with almost $3 billion of those losses coming in the last few weeks.

“The recent rally may be the final tipping point for the mother of all short squeezes,” said S3 Partners’ Ihor Dusaniwsky. “If shorts are forced to close their bets, the Tesla rally may “get turbocharged to even higher levels.”

1 Bank leaked my loan request to family who tried to rip me off
2 Eason acquires rival Dubray Books for undisclosed sum
3 Solar panels: Are they worth the investment?
4 When the Chemistry no longer works – the closing of a leading Irish ad agency
5 What is at stake for Ireland in the new Brexit talks?
6 Digicel’s earnings rise as it looks towards refinancing $1.3bn of bonds
7 Can I see my father’s previous wills?
8 Ryanair and Aer Lingus monitor impact of coronavirus on travel to Italy
9 Fuel company loses €1.3m challenge over tax bill
10 Coronavirus leads United Airlines to withdraw profit forecast
Real news has value SUBSCRIBE
Save money on international transfers