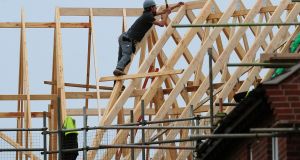 The purchase scheme offers first-time buyers the chance to get up to €20,000 to put against their deposit on a new home. Photograph: Rui Vieira/PA Wire

One hundred and twenty first-time buyers applied for the Government’s new Help-to-Buy scheme within the first few hours on Tuesday.

The home purchase incentive offers homebuyers the chance to get up to €20,000 to put against their deposit on a new home.

Applications opened on the website of the Revenue Commissioners on Tuesday morning and, by 1pm, 120 people had applied, a spokeswoman for the tax authority said.

That number is likely to rise significantly in the next few days as people looking to avail of the scheme have first to register for the Revenue’s online tax affairs portals and, in the case of PAYE workers, complete up to four tax return forms as part of their application.

The scheme is open to first-time buyers who have signed contracts since July 19th last year or will do before the end of 2019 on newly-built homes, or properties they are building themselves worth less than €500,000.

It provides a payment equal to 5 per cent of the property value up to a maximum of €20,000 by way of a rebate of income tax and DIRT paid by the homebuyers in the four years before the year they buy their first home.

The scheme was designed to enable people who were having trouble saving a deposit of between 10 and 20 per cent of the property value under tighter Central Bank mortgage lending rules introduced in February 2015.

However, the Central Bank eased those rules in November, just weeks after Minister for Finance Michael Noonan announced details of the Help-to-Buy scheme in the budget. As a result, first-time buyers now need a deposit of just 10 per cent, and half of that will come from the Help-to-Buy programme.

That has led to fears that the scheme could create a new property bubble at a time when prices are already rising and supply of new homes remains restricted.

Applicants must take out a mortgage of at least 70 per cent of the value of the property to qualify and must live in the property for the first five years after they buy or build it.

All applications are processed through the Revenue and Tuesday was the first day it provided the necessary forms. The 120 applications came despite an early hitch which meant there was no mention of the scheme on the Revenue’s homepage.

Applicants can only find the necessary forms once they log in to the Revenue’s online system. For PAYE workers, this means registering for its myAccount service while self assessed and business users must use ROS (Revenue Online Service). Both of these can take a number of days to set up.

1 Hotel bookings collapse in wake of additional Covid restrictions
2 Michael O’Leary is the boss you want to lead an airline out of crisis
3 In this strangest of recessions, what happens next for Ireland?
4 FBD changes wording of insurance policies as fight over virus payouts plays out
5 Estée Lauder staff at Dublin airport plan further strike action
6 Boohoo report highlights issues on pay and conditions in digital economy
7 Should I switch bank now with Ulster Bank at risk of closing?
8 Bank of Ireland sees about 2,000 staff apply for voluntary redundancy
9 Best Covid-19 ‘influencers’ will avoid hectoring
10 Dunnes Stores set to enter grocery delivery market
Real news has value SUBSCRIBE
Save money on international transfers