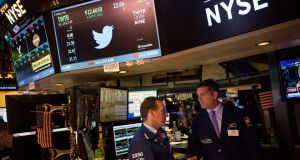 “Stocks have more than tripled since March 2009, with six of the last eight years producing double-digit returns.” Photographer: Michael Nagle/Bloomberg

An S&P 500 advance in 2017 would mark nine consecutive years of gains – a winning streak almost unparalleled in market history, equalling the 1991-1999 run that was followed by the dotcom crash.

Stocks have more than tripled since March 2009, with six of the last eight years producing double-digit returns. Still, this bull market will be remembered more for its longevity – it is the second longest in history, surpassed only by the astonishing 1987-2000 bull run – than the magnitude of its gains (it ranks fourth in terms of total returns).

Furthermore, it could be argued that stocks endured a stealth bear market that ended at February 2016’s market bottom, although indices only fell by 15 per cent (a bear market is defined as a fall of at least 20 per cent). The average stock lost a third of its value and equities went nowhere over an 18-month period.

Since then, the mood has shifted. The bull market doesn’t look tired; a record-equalling ninth consecutive year of gains is more likely than not.

Retail polls conducted by the American Association of Individual Investors (AAII) show investors are not yet euphoric, although there has been a notable increase in bullishness. Almost half of the core sentiment indicators tracked by Jason Goepfert from the Sentiment Trader blog are “at an optimistic extreme”.

Over the last eight years, investor sentiment has largely bounced “back and forth between panic and relief,” said Charles Schwab strategist Liz Ann Sonders. “We haven’t gotten anywhere near the kind of euphoria that exists at major bull-market peaks.”

That may be changing. This might be the year when ordinary punters regain their enthusiasm for equities; they are, alas, eight years late to the party.

Some investors might think it’s too late to buy into emerging markets – the sector has advanced 20 per cent since February – but high-profile value investor Rob Arnott reckons a multiyear bull market is on the cards.

The Research Affiliates founder described emerging market equities as the “trade of the decade” last January, prior to a furious rebound. At the time, the region traded on a cyclically adjusted price-earnings (Cape) ratio of just 9.6, with Arnott noting that sub-10 Cape readings were quite the rarity in equity markets.

Last year’s rally has largely tracked the average experience following such valuations, says Arnott, who expects inflation-adjusted returns of 7.5 per cent over the following decade. “Ten months into a bull market,” he says, “is no time to cut and run.”

Assessments as to what’s in store for European equities in 2017 invariably focus on political risk and the rise of anti-EU populist sentiment, but are investor fears overdone?

Investors are especially nervy about France, where you can get odds of 5/2 on far-right leader Marine Le Pen winning May’s presidential election. Last year’s political surprises (Trump, Brexit) have resulted in many taking an “expect the unexpected” approach, but this risk is “slightly overstated”, says Credit Suisse.

Funds flowed into Europe in 2015 but 70 per cent of that money had left by December 2016, Credit Suisse notes, underscoring the depth of investor fears. Even if the political landscape does deteriorate, the more bullish strategists expect any downside to be limited by earnings growth.

Earnings remain 44 per cent below 2007 levels, and investors could be forgiven for losing patience, given the Godot-like wait they have endured for an earnings turnaround.

Still, overall expectations are low, as evidenced by undemanding valuations and sizable fund outflows. If 2017 proves less politically volatile than 2016, then the potential for above-average returns is obvious.

It has been quiet out there. How quiet? Well, on December 21st, the spread between the S&P 500’s intraday high and intraday low was just 0.26 per cent, according to Bespoke Investment Group, making it one of the most boring days over the last three decades.

More tedium was to follow, with equities confined to an intraday range of less than 0.5 per cent on six consecutive days. Since 1970, notes LPL Research, such tight trading ranges have only been seen on a handful of occasions.

The recent lull is a byproduct of the holiday season; similar trading patterns were registered in December 2013 and December 2014. A pick-up in volatility can be expected, although investors will be hoping January 2017 will prove less eventful than January 2016, when stocks endured their worst-ever start to a new year.