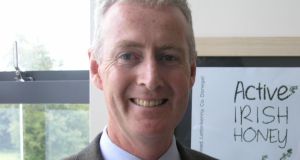 Move over New Zealand Manuka honey. A group of enterprising businessmen and beekeepers in Donegal are about to launch an Irish equivalent under the Active Irish Honey brand.

Manuka honey has achieved something of a cult status among health conscious consumers who swear by its medicinal benefits.

Much is made of its “activity level” which is expressed as the percentage of phenol present. The higher the level, the more expensive the honey. The Donegal entrepreneurs believe natural Irish honey has equally high activity levels, it is just that this has never been scientifically evaluated and used as a strong selling point – until now.

As luck would have it, just down the road in Sligo IT head of life sciences, James Brennan and his team have gained international recognition for their apian research. They are in the process of testing the activity levels in the Donegal honey. This is being funded under Enterprise Ireland’s innovation voucher scheme that allows small business to tap into third-level expertise.

The idea for Active Irish Honey came about when businessman Conor Daly, whose day job is in digital marketing, began beekeeping in a small way. When his first crop was harvested, he found people asking for some to help with a variety of ailments from pollen allergies to sore throats.

“One hears stories about the power of honey and many people see it as a superfood,” he says. “In Ireland we import around €90 million a year in honey and we already know that people are willing to pay a premium for Manuka honey. The question for us was, would they do the same for a certified Irish honey with a similarly rated activity profile?”

Daly’s partners in the venture are businessman and engineer Karl Diver, entrepreneur and food expert Austin Duignan and professional beekeeper German-born Oliver Luttringhaus, whose North West Honey apiary is based in Donegal.

“Our objective is to create a new and sustainable honey production and sales model that is scalable, commercially viable and offers quality local employment opportunities,” Daly says. “We are, of course, interested in the Irish market but we know through Oliver that the German market is also willing to pay a premium for certified organic honey.

“By working with IT Sligo, we will be able to see what flora/crops are producing the most active honey and keepers will be able to position their hives for the bees to feed accordingly.”

The fledgling business is based in the CoLab incubation centre at Letterkenny Institute of Technology and has received €10,000 in start-up funding from the Donegal Enterprise Board.

Preliminary testing of the honey is showing encouragingly high levels of activity and the brand will be officially launched at this month’s Donegal Food Festival.