New EI boss: my loyalties are with SMEs 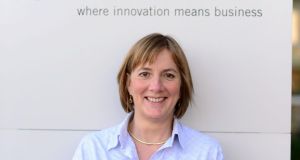 Enterprise Ireland has been playing the matchmaker over the past few years, trying to build sound relationships between sometimes unwilling partners. And while matrimony is not the object, effective working partnerships certainly are as it strives to build links between industry and academia.

EI’s new chief executive, Julie Sinnamon, knows all about this activity and in her years with the organisation has aided and abetted it. She does so with a clear vision of why it is important. The right kind of partnership can create jobs, see the formation of new companies and boost exports.

“Enterprise Ireland’s focus is on driving export growth and quality jobs. That is a high-level perspective,” she says. “The innovation agenda is central to this, working on an ecosystem that will achieve this.”

The money has certainly been available to bring together often resistant bedfellows. The State spent €773 million on research and development related activity in 2013 and EI was given €107.6 million of this, almost 14 per cent of the total, she says. And while EI has a very clear and determined focus on building capacity within Ireland’s indigenous SMEs, this money is spent on both sides of the divide with support available to companies and to academics to help forge connections between them.

Building this innovation ecosystem of research which sees companies and academics working as partners has taken some time, Sinnamon says. “For the past decade it has been getting the system up and running. Now it is up and running, how can we make it more effective and achieve better returns from it. Once the third level and SMEs work together it has to be a win-win.”

The strategy is simple enough – get companies with a need hooked up with the problem-solving potential of higher education research. The results should mean new products and services and also jobs, she argues.

The flagship manifestation of this is seen in the Technology Centre programme run by EI and IDA Ireland, started in 2007 with a budget of €100 million. There are 15 centres established so far in areas such as cloud computing, food for health, nanotechnology, bioenergy, IT and others and more than 300 companies are involved in them. They are based on the campuses of our third-level institutions but are industry-led organisations. And because both indigenous companies and multinationals are encouraged to interact with the academics involved in the centres, the programme is also meant to encourage links between the two private sector camps.

Sinnamon has no confusion where her loyalties lie: with the indigenous SMEs. But sometimes their interests can best be served by making them connect with the wider innovation ecosystem. “The more collaboration that happens the more it will become second nature, so it is important to promote both company research and third level research.” There will also always be a need for research to take place within each camp. “I don’t see a situation where third level R&D is going to replace the research going on within the companies.”

However one describes the programme, it does create work for Ireland’s scientists and engineers. EI spent €20.6 million last year on its commercialisation fund with the goal to move research discoveries as quickly as possible out of the lab and into commercial enterprise. Last year 64 projects were supported by the fund, which is open to HEI researchers but is meant to deliver products, services and jobs.

Certainly the effort seems to be paying off. The last three years in particular have seen a major increase in collaborative activity between SMEs and higher education institutions (HEIs), with 825 collaborations of all types taking place with EI support. “The trend is a growing level of collaboration and as it grows it can have a fluid transferability,” she believes. All of this research is funded by the State. “The key thing is to increase the number of companies engaging in the centres.”

EI supports in-house R&D within companies and also promotes industry-led research in the HEIs, but the hoped for response is not research in itself. “I need to emphasise that we do not fund research, we leverage the State investment of over €700 million per annum in public research assets to create and protect jobs. We use the €107 million to help companies in Ireland to gain competitive advantage, to build new companies and to help companies in Ireland win more international research and innovation funding from programmes like Horizon 2020,” she says. Horizon 2020 is the new EU research budget worth €79 billion.

Sinnamon views it as essential that companies tap into the funding available in Horizon 2020. “Our interest [in Horizon 2020] is company development,” she says. “It is driven by an awareness that there is a considerable amount of money in the system. But it is not all about the money – the key point to me is the relationships. You get access to a pot of expertise in another country.”

“ Participation in the EU programme also helps companies form contacts here and abroad and it builds reputation. It opens up linkages with other researchers rather than being just another source of funding,” she says. “You are connected into best practice. It has to strengthen long-term sustainability and capability. The money gets people interested in it but for me it is the impact on these companies.”

While EI’s success will probably be measured in short-term goals such as spinouts, patents and jobs created, being successful in merging aspects of the higher education and SMEs research capacity should have a much bigger impact over time. It will make Ireland more competitive and also move it up the international rankings as being an innovation leader rather than innovation follower. The future looks good as far as Sinnamon is concerned. “We have achieved a massive amount against a difficult economic background,” she said. “This augurs well over the coming five years.”