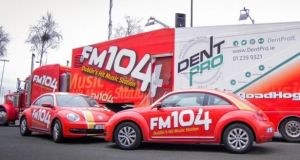 Wireless Group owns seven stations in Ireland, six of them in the Republic, including FM104 in Dublin

In its final set of results as an independent company Wireless Group, formerly UTV Media, reported a 23 per cent jump in first half revenues to £38 million, although this lagged some analysts’ forecasts.

Rupert Murdoch’s News Corp is set to take over the group in a £220 million (€255 million) all-cash offer.

Belfast-based Wireless sold its television business to ITV for £100 million in February 2016 and is now a focused radio group operating in the UK and Ireland with assets including talkSPORT and a growing digital division. Wireless owns seven stations in Ireland, six of them in the Republic – FM104 and Q102 in Dublin; LMFM in Louth and Meath; Cork’s 96FM and C103; and Live95FM in Limerick – and U105.8FM in Belfast.

Revenues at the group’s Irish radio business rose by 1 per cent to £8.9 million, with operating profit down by 43 per cent to £1.2 million. Wireless said that the Irish radio advertising market continues to lag the recovery in the Irish economy, “particularly amongst larger advertising agencies”, as it added that currency tailwinds mitigated the impact of this on reported revenue.

Chairman Richard Huntingford said the group “performed well” in the first six months of the year, although he pointed to “softer” advertising trends in local stations and Ireland and said the impact of the UK’s decision to leave the European Union remains unknown.

“Whilst it is still unclear what impact the uncertainty created by Brexit might have on advertising revenues in the all-important Q4, including in Ireland, the group anticipates a full year out-turn broadly in line with expectations.

Last week Rupert Murdoch’s News Corp said its bid to take over Wireless Group received backing from more than 92 per cent of shareholders. The all-cash offer, announced in June, values Wireless at £220 million (€255 million). Mr Huntingford said that “good progress” is being made in respect of the regulatory clearances required in connection with the offer. Wireless said it will not pay an interim dividend.