Windfall of €50m on the way for Cairn Homes founders

Seen & Heard: Also in the Sunday papers are stories about Seán Quinn jnr and a golf drive 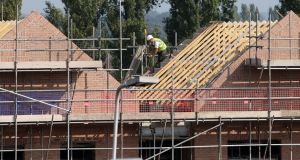 Three founders of Cairn Homes are “on track to receive shares worth about €50 million”. Photograph : Peter Byrne/PA Wire

The Sunday Times reports that the three founders of Cairn Homes are “on track to receive shares worth about €50 million” after the listed homebuilder hit its targets last year. Founder shares allocated to investors, including members of the Stanley family, will be converted into ordinary shares valued on a percentage of the increase in the company’s value.

The Sunday Times also reports that a report by the UK’s Financial Conduct Authority has found that the finances of bust Dublin-based spreadbetting group Worldspreads were “knowingly falsified” to keep its 2007 flotation on track.

Dublin-based publican Louis Fitzgerald has applied for planning permission to develop a six-storey block of 161 units of student accommodation next to his Big Tree pub on Dorset Street, the Times says

Sean Quinn jnr, son of the former building materials and insurance billionaire, was “forced to stop” renting out his €1 million Dublin apartment on Airbnb after complaints from local residents, the Sunday Business Post states. The three-bedroom, 2,500sq ft property in Castleknock fetched €400 a night.

SalesForce, a cloud-based sales and marketing company, may double its Dublin staff to more than 2,000, the Post estimates. It currently employs 1,100 people in Dublin but the newspaper says it is looking for premises in the city to accommodate an extra 1,000 staff.

The Post also reports that chocolate company Lily O’Brien’s is up for sale for €50 million. It says the business, which is majority owned by US-Irish joint venture Carlyle Cardinal Ireland, has hired IBI Corporate Finance to find a buyer. The chocolate business is one in a portfolio of eight owned by the joint venture.

About 200 members of the bust Glen of the Downs golf club are trying to put together a bid to buy it out of liquidation, the Post says. Another 150 are required to make the bid viable, the paper estimates. The golf club’s former membership included many high-profile names from the world of business.

The Sunday Independent reports that the Kilkenny Group retail business is facing a potential €300,000 bill from Revenue over the status of a villa owned by the business but used by members of the O’Gorman family behind Kilkenny. The villa featured in a court battle recently between members of the family. The Independent says it has seen documents to suggest a Revenue bill is a possibility.

The Independent also reports that Hainan, a Chinese airline, could launch a direct flight from Dublin to Beijing. The report says talks will be held in coming weeks over the potential move.