President opens the throttle in war of words with iconic manufacturer 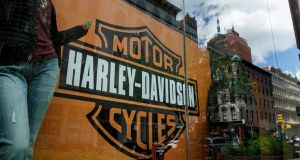 US President Donald Trump lashed out at one of his favourite US manufacturers on Tuesday, criticising Harley-Davidson over its plans to move some of its motorcycle production abroad and threatening it with steep punitive taxes.

In a series of on tweets on Tuesday, the president accused the Wisconsin-based company of surrendering in Trump’s trade war with Europe and said the firm would lose its “aura” if it produced bikes overseas.

“If they move, watch, it will be the beginning of the end – they surrendered, they quit!” he wrote.

“The Aura will be gone and they will be taxed like never before!”

The attack came a day after Harley-Davidson announced that it would move some of its production abroad in response to stiff retaliatory tariffs that the European Union imposed in response to Trump’s trade measures. Rather than raise prices to cover the new 31 per cent tariff on bikes it exports to the European Union, Harley said it would shift some of its production to overseas facilities to avoid the tariffs.

On Tuesday, Trump accused Harley of using the trade dispute as an excuse to send offshore more jobs following the recent construction of a plant in Thailand. The suggestion echoed the sentiment expressed by one of the unions that represents Harley workers.

Harley’s Thai plant was developed to mitigate tariffs that are already in place in Asia. Trump, who has hosted Harley executives at the White House and lauded the company as an engine of US growth, said that Harley workers and customers were “very angry.”

Trump also revived a threat that he used to lob at companies when he was a presidential candidate, warning Harley that they would pay a financial price for moving manufacturing abroad.

“Harley must know that they won’t be able to sell back into US without paying a big tax!” the president said. The suggestion appeared to misunderstand – or misconstrue – the fact that Harley would be using its overseas production facilities to sell motorcycles in Europe, not back into the United States.

1 Who are Ireland’s 17 billionaires?
2 Former workers stole confidential information, O’Flynn tells court
3 Are there annual limits on inheritances or gifts to a child?
4 MEPs reject Central Bank’s Gerry Cross for key banking role
5 Court dismisses part of action over claim of ‘catastrophic losses’ on pension schemes
6 Ireland has EU’s most progressive tax system, study finds
7 Ryanair application for injunctions against Skyscanner gets April date
8 Cairn Homes gets permission for 426 homes near Greystones
9 Phil Hogan says EU ready to do ‘ambitious’ UK trade deal
10 My father in a nursing home wants to gift me his house
Real news has value SUBSCRIBE