Guaranteed Irish has taste for expansion in 21st century revival

Comeback plotted for symbol once synonymous with well-known Irish brands 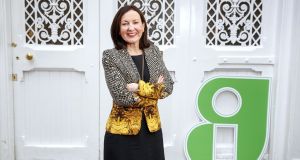 Guaranteed Irish has begun a push to triple its membership by the end of 2020 as part of moves to reinvent itself beyond its beginnings in the 1970s and 1980s.

The organisation, which has more than 300 members following a relaunch last year, is targeting a membership of 500 from all sectors of the Irish economy by the end of 2018 and hopes to reach the 1,000 mark in another two years.

Led since 2016 by chief executive Bríd O’Connell, it is both stepping up its presence at key promotional events and increasing its Government lobbying efforts on issues such as procurement policy.

It is seeking a 10 per cent weighting advantage for its members in procurement bids, which it says will support job creation.

“The Government has to look at this differently. Procurement doesn’t mean the cheapest. It means the best value,” Ms O’Connell said. “It is not anti-EU to support the local. We are Irish and we are European.”

Ms O’Connell is keen that the more modern iteration of Guaranteed Irish does not promote a stale or exclusionary idea of Irishness. The organisation deliberately uses the phrase “businesses based in Ireland” rather than only “Irish businesses”, while its slogan is “All Together Better”.

“Since the recession, we have repaired a lot of the damage done to our reputation and we want to be part of that. Our members want to have that seal of approval coming off Ireland.”

Guaranteed Irish will exhibit for the first time at the Taste of Dublin food event later this week, presenting products from members such as Flahavan’s, Ballymaloe Foods, Clonakilty Black Pudding, Tayto, Kerry Foods and Musgrave.

It is working with its pharma industry members on a submission paper to Government on what needs to be done to improve patient access to new medicines through the Health Service Executive, and is also negotiating a sensitive path through Brexit uncertainty, believing that as well as causing disruption to exports to the UK, Brexit will also present new opportunities for Irish companies in the European Union market.

Guaranteed Irish began in late 1974 as a campaign run by the Irish Goods Council and was regarded as a more sophisticated message than the “Buy Irish” campaign of the decade before.

The “Guaranteed Irish” symbol, initially launched with a IR£50,000 advertising campaign, was intended to both identify Irish products to shoppers and convey the idea that they did not have to accept lower quality when they purchased Irish-made goods.

After the European Community took the Irish government to court in the early 1980s to stop the campaign on the basis it contravened the Treaty of Rome, it was resurrected as an independent not-for-profit in the mid-1980s. Its well-known “g” symbol went on to adorn a generation of schoolchildren’s copybooks, before falling out of favour.

“People have a nostalgic feeling for the symbol,” Ms O’Connell said. “They trust it and have a fondness for it.”