From the Dark Hedges to the south of France: levelled trees bring two advertising ‘Oscars’ 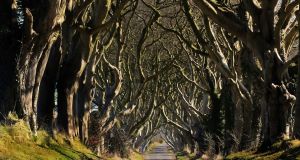 The Dark Hedges near Ballymoney, Co Antrim, aka the Kingsroad in ‘Game of Thrones’. Photograph: Getty.

It has already collected so many awards it will need its own kingdom to display them, but now Tourism Ireland’s Game of Thrones campaign has won gold and silver at the prestigious Cannes Lions International Festival of Creativity.

The tourism marketing body has since 2014 promoted Northern Ireland as a holiday destination to fans of the HBO fantasy drama, much of which is filmed at Belfast’s Titanic Studios and on location in the North.

Enter Storm Gertrude. In January last year, the Dark Hedges near Ballymoney, Co Antrim, which stands for a section of the Kingsroad in Game of Thrones, was hit hard by winds fiercer than Cersei Lannister on a bad day.

Tourism Ireland used fallen wood from levelled trees to craft 10 special doors, each one depicting an episode from the sixth season of Game of Thrones. The doors are now hanging in pubs and other venues across the North, adding to the Game of Thrones tourist trail.

The Doors of Thrones campaign, which reached an estimated 126 million people and generated an estimated £11.3 million (€13 million) in media coverage, was awarded a Gold Lion in the “outdoor – special build” category at the Cannes Lions, regarded as the Oscars of the advertising industry.

Tourism Ireland also won a Silver Lion for “use of ambient outdoor”. (Ambient advertising is an industry term for placing ads in unusual locations and formats.)

To date, Doors of Thrones has won more than 30 awards from the marketing and advertising industry across Europe and the US.

“Winning a Cannes Lion is the ultimate industry accolade, so we’re really proud that our Doors of Thrones campaign has been singled out for not one, but two, awards,” said Tourism Ireland chief executive Niall Gibbons.

“The international tourism marketplace is an extremely competitive one and we are constantly looking at innovative and engaging ways to reach potential holidaymakers.”

Tourism Ireland will begin a new Game of Thrones-themed campaign next month, to coincide with the premiere of the seventh season.

Some filming locations may not be quite as romantic as the tunnel of interlinking beech trees at the Dark Hedges. Game of Thrones actor Liam Cunningham, who plays Davos Seaworth, once revealed that scenes set on his character’s boat were filmed “in a car park in Banbridge”.