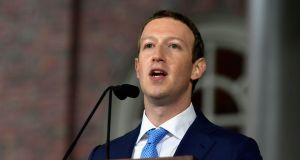 Facebook shareholders will confront Mark Zuckerberg over the social network’s role in spreading fake news at its annual general meeting on Thursday, arguing democracy is at risk every time it tweaks an algorithm.

Impact investing funds Arjuna Capital and Baldwin Brothers are set to put forward proposals at both Facebook and Alphabet’s agms, demanding the companies evaluate the impact of fake news flows on their brand reputation and whether it will create public policy risks.

Natasha Lamb, Arjuna Capital’s director of equity research and shareholder engagement, said she believed that even though both companies have taken steps to address the problem of fake news spreading online, neither had gone far enough.

“Both prefer to see themselves as neutral technology platforms but they have been transformed into media platforms – that is why we are so concerned,” she said.

Facebook already stands to suffer under German legislation that would impose fines of millions of euros on social networks that do not remove fake news or hate speech, she added.

Ms Lamb is hoping to meet Facebook management at the meeting, but they have not yet confirmed.

“The big risk to Facebook is a loss in user trust and people getting what has been coined ‘Facebook fatigue’ and turning away from the platform,” she said.

“When false content is being propagated at scale over Facebook’s platform that presents a real risk not only to the company and user trust in the content they find on Facebook but also to our democracy and having an informed electorate.”

Facebook has been under fire after several of the most shared stories on the social network during the US presidential election campaign were proved to be fake, prompting questions about their role in the election of US President Donald Trump.

After Mr Zuckerberg initially dismissed the allegations that the platform had influenced the election as “pretty crazy”, it has since shown signs of taking the issue more seriously.

Facebook has tried to cut off financial incentives to fake news websites, is partnering with fact-checkers around the world to identify hoaxes, and has created a journalism project to work more closely with legitimate publishers.

Facebook opposes the measure to be put forward, arguing it has been working to address the issue of false news and hoaxes for years and the content is already prohibited by its community standards and terms of service.