Ryan Tubridy and mother paid €485,350 by his media company 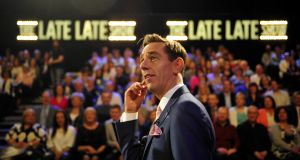 Late Late Show presenter Ryan Tubridy – who turned 44 last weekend – remains far and away the highest-paid RTÉ broadcaster, with Joe Duffy the only other broadcaster to receive over €400,000

New accounts lodged by Mr Tubridy’s Tuttle Productions Ltd show that the Late Late Show presenter shared directors’ pay of €485,350 with his mother, Catherine Tubridy, over the 16-month period to the end of December last.

The latest figures from RTÉ show that Mr Tubridy was the best-paid broadcaster at the station in 2014, when he received fees totalling €495,000. Mr Tubridy received the same level of pay in 2013. This was down significantly on the €752,950 received by Mr Tubridy in 2012.

However, Mr Tubridy – who turned 44 last weekend – remains far and away the highest-paid RTÉ broadcaster, with Joe Duffy the only other broadcaster to receive over €400,000, at €416,893.

The figures from Tuttle Productions Ltd would also include Mr Tubridy’s earnings from BBC, where he has occasionally presented a radio show on BBC Radio 2. During the period under review, Mr Tubridy filled in for radio legend the late Terry Wogan in late 2015 on BBC radio after the Limerick native had fallen ill.

During the 16-month period, the firm’s cash pile increased from €42,825 to €70,184. Mr Tubridy’s flagship TV and radio shows continue to perform strongly. Last year, the Toy Show edition of the Late Late Show was the most-watched TV programme in Ireland in 2016, attracting 1.57 million viewers or a whopping 76 per cent share of the audience.

The most recent JNLR figures show that Mr Tubridy continues to make gains in listenership, with his Monday to Friday show enjoying a gain of 13,000 to 336,000 to make it one of the most-listened-to daily shows in the country after Morning Ireland, Liveline and Today with Seán O’Rourke. Mr Tubridy’s salary is funded between licence fees and commercial revenues – the latest figures available show that RTÉ took in €155.4 million in commercial revenues in 2015 – an increase of 4 per cent.

This was on top of licence fee revenue of €178.9 million for the year. RTÉ does not disclose what individual programmes generate in commercial revenues.