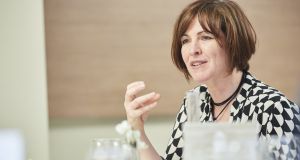 Representatives of the Irish Music Rights Organisation (IMRO) met Irish MEPs in Brussels on Tuesday to discuss the importance to the music industry of the European Commission’s proposed copyright reforms.

IMRO chairwoman Eleanor McEvoy, the singer and composer of the 1990s hit Only a Woman’s Heart, and IMRO chief executive Victor Finn outlined their concerns that YouTube and other user upload platforms do not deliver a fair return to musicians and composers for their works.

The briefing was followed by a live performance by McEvoy, who took up her IMRO role at the start of May.

The music industry has argued that its negotiating hand with platforms such as YouTube has been weakened because the Google-owned company and others benefit from what the industry believes is a misapplication of “safe harbours” in copyright legislation.

These were originally introduced to protect internet service providers (ISPs) and server hosting companies whenever their customers uploaded content that infringed copyright.

Bodies such as the International Federation of the Phonographic Industry say the law has resulted in a “value gap” in which the revenue generated by consumption of music on these platforms is not fairly distributed to creators.

The European Commission is re-examining copyright law as part of its digital single market strategy.

A draft directive has proposed that platforms should be obliged to use “appropriate technologies” to proactively determine whether they are hosting copyright material without licence.

“IMRO welcomes the opportunity to shine a light on the issue of safe harbour protection and the need to address this loophole in order to create a level playing field between the platforms and rights holders,” said Ms McEvoy.

She added that the state of play has led to “an imbalance of bargaining power”.

Mr Finn said IMRO welcomed the commission’s proposals as “a step in the right direction” that would help clarify the liabilities and responsibilities of the platforms.

“Ensuring creators receive compensation for all uploads of their work is crucial to ensuring a sustainable basis for the music sector,” he said.

IMRO, a not-for-profit organisation with more than 11,000 members, collects and distributes royalties arising from the public performance of copyright works in Ireland on behalf of songwriters, composers and music publishers who belong to either IMRO or affiliated international bodies.