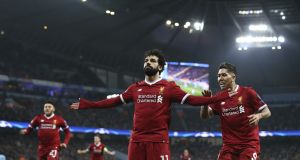 Game on: TV3 has secured the rights to the Champions League and the Europa League finals

TV3 has secured the exclusive Irish rights to the Champions League and the Europa League finals and many of the competition matches for the next three years.

The broadcaster, which was acquired by Virgin Media in 2015, has won the rights to all Wednesday UEFA Champions League matches, all Thursday UEFA Europa League matches, and the finals of both competitions as of next season.

Virgin Media said it has Irish exclusive rights to 327 matches across both soccer competitions per season and will also share rights for 16 Tuesday night Champions League matches.

The deal will be considered a big win for the broadcaster, which also outbid RTÉ for the rights to broadcast rugby’s Six Nations Championship for four years in November 2015.

While it’s unclear how Virgin will deliver this volume of matches, it is believed that there will be no pay-per-view element. The company may opt to provide some coverage via a red button or online streaming. Virgin is expected to provide an update in the coming weeks.

Additionally, the UEFA Super Cup will be live on TV3 for the next three years under the deal.

“The UEFA Champions League is the biggest and most prestigious club competition in the world and we are delighted to extend our partnership with UEFA for both the Champions League and the UEFA Europa League. This landmark deal confirms Virgin Media as Ireland’s leading connected entertainment business and is great news for TV3 viewers and Virgin Media customers,” said Pat Kiely, managing director of TV3.

“Our award winning Sports Broadcasting team look forward to bringing the biggest clubs and the best players to our viewers and customers in new and exciting ways over the coming European football seasons,” he added.

RTÉ will broadcast Champions League matches on Tuesday nights for the next three years, something RTÉ’s group head of sport said was a “truly positive result”.

“The sports rights market continues to evolve and RTÉ is now competing against major international companies both here and in the UK, both free and subscription, for the right to broadcast premium sports events in this country,” RTÉ’s Ryle Nugent said.

A plan to rebrand TV3 Group’s channels to Virgin was recently deferred by the broadcaster and its owner.