September issues bulge, but desperation is the big trend 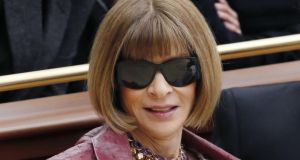 US ‘Vogue’ editor Anna Wintour: “There is something about fashion that can make people really nervous.” Photograph: Patrick Kovarik/AFP/Getty Images

“There is something about fashion that can make people really nervous,” says US Vogue editor Anna Wintour in the documentary The September Issue. If you are one of those nervous people, look away now. It’s August, which means the September issues of certain glossy monthlies are bulging, fat with ads for the season ahead.

In the age of digital media, print magazines such as Vogue materialise each month like artefacts from a 20th century time capsule, their flights of fancy more suited to a debutante idling on her “grand tour” than the shift-working, Airbnb-Ryanair-Tinder consumer of today.

In response to industry-wide circulation drops, big publishing groups are pouring money into their digital presence, and online, their magazine brands increasingly function as shops, competing directly with etailers. In print, magazines remain shop windows, nothing more or less, and these tangible, flickable, perfumed volumes are ad magnets – for now.

So what have we got? At the time of writing, the only Irish September issue in shops is Harmonia’s Irish Tatler (160 pages), which features on its cover a cut-out image of Amy Huberman in sparkly yellow – lest readers had forgotten the importance of buying the title this month, she’s reclining on top of the words “the September issue”. Identified trends this season include the 1970s, the 1980s and “personal trainers for your face”.

It would be easier to list the names – luxury and “high street” – that haven’t taken out ads in Vogue than those that have, but the one that jumps out is Apple, which wouldn’t have had much change left out of £500,000 for its 12-page spread. Apple likes showing off its new Watch in women’s glossies: in February, a spread in US Vogue was estimated to have cost north of $2.2 million.

Time Inc UK’s Marie Claire hasn’t got the same premium feel, either to its content or its rate card, and at the last count its circulation drop was sharper than a Vidal Sassoon fringe. For its Natalie Portman-fronted September issue (282 pages), it has slashed its cover price, as has stable mate InStyle (202 pages).

Company-watchers can read into that what they will: Time Inc, spun off from parent Time Warner in 2014, is reviewing the future of its UK titles, including the soon-to-go-free music weekly NME. In the interim, trends identified by Marie Claire include the 1970s, the 1980s and – ominously – the colour red.

Speaking of Red (226 pages), it has Helena Christensen on its cover, with identified trends including the 1960s, the 1970s and restaurants with only one thing on the menu. The more famous Hearst title Cosmopolitan (210 pages), meanwhile, had an unfashionable 2014, seeing its circulation wane 10 per cent in the second half. Its digital edition readers went into reverse too.

Dashing elegantly on, we come to Glamour (280 pages), where identified trends include the 1970s, the 1980s and, er, bum bags. The younger, cheaper Condé Nast title, adorned by Rita Ora not quite managing to wear a dress, shifts twice as many copies as Vogue, Marie Claire and Red and almost double what Cosmopolitan sells. Glamour is usually “handbag-sized”, but as it’s September, it has also brought out a “collector’s edition super-sized” issue. “Of course, you could also download us onto your tablet or smartphone,” writes Jo Elvin, a touch desperately, in her editor’s letter.

On circulation alone, Hearst’s Elle (402 pages, with an admirably moody Kristen Stewart on the cover) ranks mid-table, but it deals in high fashion and has little trouble luring the same class of advertiseras Vogue.

Like Vogue, UK Elle’s inside front cover gatefold is occupied by Ralph Lauren, which appears to be flogging its shearling collection, just right for teaming with a white lace ankle-grazing dress while walking a pair of huskies in the Siberian snow. Identified trends include . . . oh never mind.

It’s going to be a long autumn/winter.