TV3 warms up for ‘Super Saturday’ ahead of channel rebrand 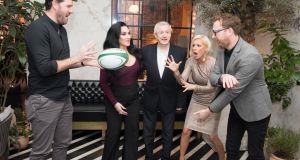 TV3 Group managing director Pat Kiely has hailed positive audience momentum as “a huge vote of confidence” in its strategy after a commercially “difficult” 2017 for all media companies.

The Virgin Media-owned broadcaster, which will rebrand in the second quarter of this year, is focusing on live “event programming” that generates extra content for an on-demand, mobile audience.

TV3 Group itself will be rebranded as Virgin Media Television and the names for the three channels will be confirmed in the coming weeks. It is unlikely that the letters “TV” will feature in the main channel’s name, while 3e and the only recently created be3 will also undergo a name change.

Mr Kiely was speaking at a launch event for TV3’s spring schedule, which is dominated by the Six Nations rugby tournament, to which it has the rights for the first time, and the first series of Ireland’s Got Talent, its version of the British format.

Both will begin on February 3rd, creating a “Super Saturday” double-header of shows that TV3 hopes will pull in both audiences and advertisers.

Virgin Media is owned by Liberty Global, the cable group controlled by Irish-American businessman John Malone. It is expected to use its Irish television interests as a guinea pig for similar investments across Europe.

Mr Kiely said TV3 would “raise the bar on quality” as a result of the boost from its parent company, which acquired the broadcaster from private equity group Doughty Hanson in 2015.

Rachel Allen was also named as a guest food critic on Marco Pierre White’s The Restaurant.

Some 13 episodes of TV3’s Red Rock will begin from January 22nd. The Garda-themed drama, originally conceived as a twice-weekly soap opera, was put on a production hiatus last August and a decision will be taken during this run on whether to make more episodes.

Mr Malone said 2017 had brought eight of the 10 best months for TV3 in its history in terms of audience share. Storm Ophelia brought the highest-ever audience for its 5.30pm news bulletin, which attracted a record 354,000 viewers on the day of the storm, while the broadcaster is also understood to be happy with the performance of current affairs programme the Tonight Show since its relaunch following the departure of presenter Vincent Browne.

TV3 is hoping for a strong week in the lead-up to St Patrick’s Day, with Manchester United due to play in the Champions League on the Tuesday night, the Cheltenham Gold Cup scheduled for the Friday and the Ireland rugby team potentially playing for glory in the Six Nations on Saturday, March 17th.

The rebrand is expected to take place just ahead of the 20th anniversary of TV3’s first broadcast – on September 20th, 1998 – as Ireland’s first commercial free-to-air channel.