RTÉ has no deal with Government to defer Lyric FM move

‘Tough decisions’ will be made on sports rights to close funding gap, says Dee Forbes 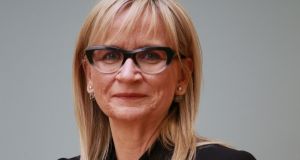 RTÉ has made no agreement with the Government to defer its plan to move Lyric FM out of Limerick, director general Dee Forbes has said. This is despite Taoiseach Leo Varadkar saying the controversial relocation should be postponed until at least next September.

Mr Varadkar told the Dáil the proposed move should not happen until a newly-established Commission on the Future of Irish Public Service Broadcasting makes its first recommendations next autumn.

But Ms Forbes told the Oireachtas communications committee on Tuesday that RTÉ had “just heard word” of the Taoiseach’s comments and was “not aware of the detail behind it”.

Ms Forbes was unable to tell the committee how much RTÉ would save by relocating Lyric FM to Dublin and Cork. RTÉ management is to meet about 20 employees based in Limerick on Friday.

The broadcaster must make “tough decisions” on content and services, including sports rights, in order to meet its target of saving €60 million over the next three years, Ms Forbes said.

“Areas like sports rights that come up for renewals, we will have to make tough decisions.”

RTÉ’s chief financial officer Breda O’Keeffe said a funding gap of €10 million to €12 million a year would remain at the public service broadcaster.

This is despite the Government announcing that an additional €10 million will be allocated in respect of free television licences for older people in the revised estimates for next year and in subsequent years. RTÉ is expected to receive about €9 million of this each year.

But the State broadcaster had costed the future running of the organisation based on a recommendation last year by its regulator, the Broadcasting Authority of Ireland, that it receive a funding increase of at least €30 million a year. Government measures announced since then have fallen short of meeting this target.

The committee heard RTÉ is still aiming to save €9 million to €10 million in personnel costs, mainly through reducing its headcount by about 200 people. The salaries of top earners will also be cut. A similar sum will be stripped from its budget for content and services, while RTÉ is also examining ways to lower its procurement costs and travel expenses.

Commercial revenue at RTÉ has “decreased significantly” this year as a result of uncertainty posed by Brexit, Ms O’Keeffe said, making the “extremely difficult” task of stabilising its finances even harder.

Minister for Communications Richard Bruton earlier said the Government was “meeting RTÉ halfway”. He said the injection of extra money had followed the Government’s examination of RTÉ’s €60 million cost-savings plan. He denied it was a measure that was dropped at the last minute from Budget 2020.

RTÉ’s use of the funding will be “closely monitored” by State-owned company advisory body NewERA, he said.

A previously mooted move to put a five-year contract for television licence fee collection out to tender will not happen until after the commission on public service broadcasting reports back in September, he said.

As a result, it is likely to be 2026 before any changes are made to licence fee eligibility rules to bring them up to date with how media is consumed.

“That is completely untenable,” Ms Forbes told the committee.

Mr Bruton said the broadcaster could benefit from a crackdown in the licence fee evasion rate in the meantime. He said he expected the rate to fall from about 13 per cent to 7 per cent under the five-year contract. Licence fee collection is currently carried out by An Post.