RTÉ could raise €70m from sale of half its Donnybrook site 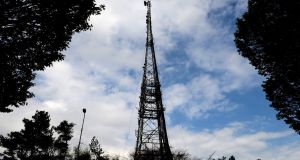 RTÉ could be in line to raise €70 million or more following its decision to sell half of its Donnybrook site in Dublin within the next six months.

Although RTÉ did not say how much land it is selling, it is believed it could amount to about 15 acres, half of the 31-acre site the broadcaster has occupied since 1961.

It’s understood RTÉ originally intended to sell a smaller parcel of land, but the larger site ultimately made greater economic and logistical sense.

There is likely to be considerable interest from developers, with some property sources suggesting it could be worth at least €70 million as a site for a large apartment scheme.

RTÉ’s land was rezoned Z12 in 2013, which makes housing a “permissible use”, meaning planning applications for housing that are within guidelines could expect to be granted.

It followed a High Court ruling in 2012 that a ban on private residential development on all institutional lands in the city’s current development plan was too restrictive.

Following a meeting of the RTÉ board yesterday, the broadcaster confirmed a portion of underutilised land west of the Radio Centre would be sold to raise “much-needed funding” for its future. The exact timings around the sales process and final details of the land to be sold are still being finalised and “are commercially sensitive”, RTÉ told employees.

RTÉ has already successfully applied for planning permission to develop a new entrance to the site from Stillorgan Road, which will become the main point of access to the campus, replacing the existing entrance on Nutley Lane. This will alleviate congestion at the junction of Nutley Lane and Stillorgan Road, it said.

RTÉ plans to lodge a planning application to move the Fair City lot to a new location onsite, while its staff creche facility is set to be relocated to a different part of the campus under the development plans.

RTÉ’s note to staff on Thursday said it had been “giving serious consideration” to the best options for the redevelopment of the Donnybrook campus for some time.

It cited a “challenging” financial position and said this had curtailed any significant investment in its infrastructure, technology and other organisational changes. “This is no longer sustainable,” the broadcaster said. “A series of independent reports have also indicated that the sale of underutilised land on our Donnybrook site represents a valuable source of much-needed funding for investment.”