Ripper Street brought back to life by Amazon

Drama has contributed €20 million to local economy over two series 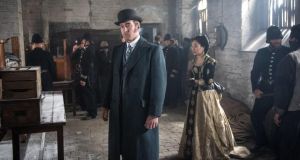 Matthew Macfadyen in Ripper Street, which was filmed on location in Dublin

Ripper Street is coming back from the dead after the period drama, which was filmed on location in Ireland, won an unlikely reprieve.

A third series of the show is to be filmed here after online retailer Amazon announced it would be made exclusive to subscribers of its on-demand service, Prime Instant Video service.

The decision to bring the series back the series will likely provide a major boost to the Irish film and television industry as the total value of the first and second series has been about €20 million, in terms of spend on local goods and services.

The series will continue to be co-produced in the US by BBC America and will screen on BBC1 a few months after it is available on Amazon in the UK. As part of the arrangement the first and second series of Ripper Street will be available to Prime Instant Video subscribers.

Filming of the third series is to begin in May with production to be based in Clancy Barracks in Dublin for several months. The first and second series of Ripper Street employed 5,000 Irish cast, extras and crew, providing approximately 170,000 Irish work hours per series.

“Ripper Street is a perfect example of a series which has showcased Irish actors, the excellent work of Irish crew and Ireland as a film location to audiences all over the world,” said James Hickey, chief executive of the Irish Film Board.

1 In this strangest of recessions, what happens next for Ireland?
2 Bank of Ireland sees about 2,000 staff apply for voluntary redundancy
3 Estée Lauder staff at Dublin airport plan further strike action
4 Michael O’Leary is the boss you want to lead an airline out of crisis
5 Air travel never going ‘back to way it was’
6 EY Entrepreneur of the Year: nominee profiles
7 Ireland’s Covid-19 economy in five graphs
8 Should I switch bank now with Ulster Bank at risk of closing?
9 Irish company to test vaccines on volunteers deliberately infected with Covid-19
10 Fortnite owner signs multimillion deal to buy Irish ‘kidtech’ firm
Real news has value SUBSCRIBE

Bank of Ireland sees about 2,000 staff apply for voluntary redundancy 06:00
Ireland’s Covid-19 economy in five graphs 05:30
EY Entrepreneur of the Year: nominee profiles 05:09
In this strangest of recessions, what happens next for Ireland? 05:00
European commission to appeal against €14.3bn Apple tax ruling 20:43
Search executive
jobs on irishtimes.com