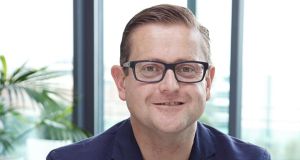 Digital and data officer Justin Cullen of Core Media: communications group is seeking more staff with backgrounds in mathematics for its analytics team

Core Media, Ireland’s largest media communications group, is adding 20 jobs to feed “relentless growth” in digital and data activities, which now account for 40 per cent of its revenues.

The new jobs will be in the areas of online media, search, analytics, social media and creative technology services. Core Media, which has billings of more than €180 million, already has more than 200 employees across its media agencies and other business units.

Core is seeking more staff with backgrounds in mathematics for its analytics team, according to Core’s digital and data officer Justin Cullen, who says return-on-investment is now being calculated “using very structured mathematical modelling”.

Meanwhile, the creative technology team, known in-house as “createch”, is also among those set to swell. It isthe team responsible for “fusions” of creative ideas and technology, such as Spar’s Twitter-powered Christmas tree in Ranelagh in Dublin, where the lights came on whenever someone sent a tweet with the hashtag #underthetree.

The 20 new jobs are in addition to Core’s graduate programme, which will see 10 graduates hired on a permanent basis. Some 280 people applied for the positions.

Whereas early digital business came from direct-response advertisers from sectors such as telecoms and financial services, more recently it is brand campaigns from fast-moving consumer goods companies fuelling growth.

“In 2010, 8 per cent of our revenues were from digital,” says Cullen. “Now it’s passing through 40 per cent and that seems to be continuing at pace. Next year, we will go through 50 per cent.”