‘Red Rock’ builds to shock death – but what next for its producers? 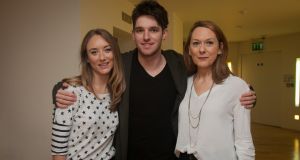 Launching a new soap opera is not something broadcasters do often or lightly, but 2015 delivered Red Rock, the show described by departing TV3 chief executive David McRedmond as “the most important thing that TV3 has ever done”.

The €7-million-a-year, Garda-themed soap – which operates on a fraction of the per-episode budget enjoyed by its British equivalents – was never going to quite replace the audience TV3 lost when UTV Ireland took away the rights to Coronation Street and Emmerdale. But what it has done is add almost 30 hours of home-produced drama a year to Irish television across 80 episodes.

“TV3 took a risk with this thing and they haven’t had the credit,” says Ed Guiney, co-founder of Element Pictures, which makes Red Rock for TV3 in partnership with former EastEnders executive producer John Yorke (first through Company Pictures, now through his new vehicle Angel Station). The shortage of drama on Irish television is “a real problem because it means people can’t progress their careers” and can’t “build up their flying hours”, says Guiney.

While Red Rock has some seasoned professionals at the helm, “from the very first day we have been bringing new people into every department”, explains Guiney, one of the soap’s executive producers. In recent months it has formalised this through new training schemes.

A writing “mini-academy” led by Yorke attracted more than 100 applicants, with eight selected to go through a dummy scripting process. Both Red Rock’s creator Peter McKenna and its lead writer Kim Revill came through a BBC writers’ academy run by Yorke.

While Ireland has some great drama writers, says Guiney, they are typically not familiar with the process of writing for a television soap.

“It’s not a talent deficit, it’s very often a craft deficit. They are well able to write for the show but they don’t know what we need from them as writers.”

Red Rock also has a separate Broadcasting Authority of Ireland-supported scheme with Screen Training Ireland for a variety of six-week work placements in on-set departments such as locations, wardrobe, hair and make-up, the art department, continuity and post-production.

“We’re working with such discipline and at such a pace that what they’ll learn in six weeks they would take six months to learn elsewhere,” says Red Rock series producer Paula Heffernan.

Another initiative she has started with Screen Training Ireland concerns rectifying a gender imbalance - though director Lisa Mulcahy won an Ifta for her work on Red Rock, most of its directors are men.

“Thankfully one of the reasons I’ve had difficulty bringing on female directors is a lot of them are already employed,” says Heffernan. “But I do find there is an imbalance in the industry.”

Under a shadowing scheme, fledgling female directors will be given the opportunity to learn from Mulcahy and her colleagues during the shooting and editing process and put relevant television drama experience on their CVs. “The number of drama directing opportunities are very limited.”

It’s an intense production schedule. The soap shoots four 22-minute episodes together over eight days and then spends five days on the edit. This compares with a 50-day shoot and many months on post-production for a film such as Element’s Room, notes Guiney.

The soap will need fresh production blood as people inevitably move on. “It’s not selfless for us,” says Guiney of the training schemes. “It’s not like we’re saying we’re great lads for doing this. It’s sort of a necessity.”

After a 12-week summer break, Red Rock’s ratings went a bit soft and there may not be a second break in summer 2016 – the producers are waiting to hear from TV3, which has just been acquired by Virgin Media Ireland.

Adding a third and perhaps eventually a fourth episode a week is a longer-term ambition, one that would require significant expansion of its crew.

“We need to build slowly to that. We need to plan properly for it,” Guiney says.

Its set at the former Player Wills factory in Dublin is also “temporary”, he adds. “Ideally what we would do is have a five-year plan and look for somewhere where we could expand to four episodes per week.”

More immediately, the Red Rock team, now one year down the line, will work to make the show “as exciting and vivid and important as possible for the Irish audience” in 2016, says executive producer Gareth Phillips.

A big episode on December 30th, in which one of the main characters is killed off, bodes well for future storylines: The death – “something we planned from the start”, says Phillips – and its aftermath are impressively executed by Revill, Mulcahy and the cast.

“They were very emotional episodes to write,” says Revill. “There were tears on my laptop. And there were real tears on the screen.”

It’s just one of the hazards of working on a soap.